Magical farming with some laughs along the way 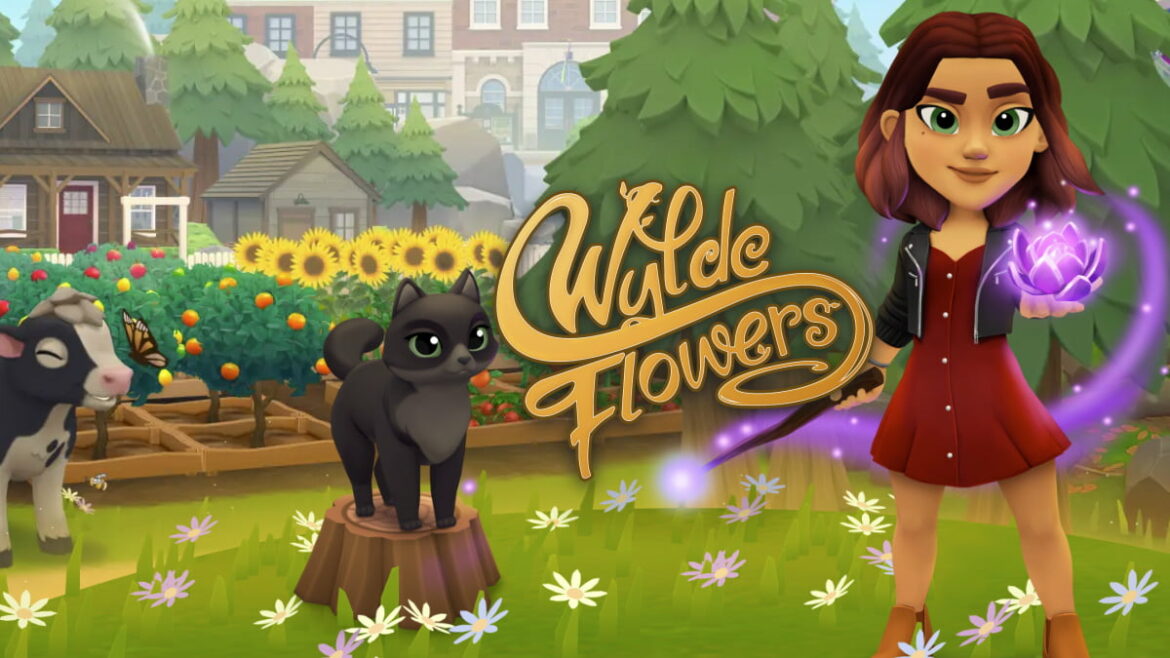 After releasing earlier this year in the Apple Store, Wylde Flowers is making its debut on Steam and Nintendo Switch! While you may already be familiar with the game if you’ve played it through Apple Arcade, you may wonder how it holds up on PC or Nintendo Switch. Does it play as well? Is the game still pretty? Should you swap over? That’s what I’m here to tell you. Join me on this journey as I tell you all about my tales in the Steam version of Wylde Flowers.

You start the game as Tara Wylde, a city girl eager to help her ‘Gramma’ out with her countryside farm. After some quick conversations and getting to know the townfolks, you’ll learn the basics of starting your farm and foraging for materials. While it does jump ahead quickly, introducing several quests in just two in-game days, the game feels surprisingly slow-paced at the start. Don’t worry, though. It does ramp up.

While I initially dreaded the first hour due to its slow pace, things quickly caught up to speed once I harvested my first few crops. Around this time, we’re introduced to the village coven, a group of witches that Gramma is a part of. It’s a lot of information to take in, but the game progresses through this portion of the story in a natural and entertaining way.

From this point onwards, I flew through a good chunk of Wylde Flowers in no time at all, feeling excited and eager to continue diving into the story. I even chatted with the townspeople often, learning more about their lives and seeing how they behaved with each other. The pop-up quests when I walked into stores, while startling at first, were also done in a way to fill in space between waiting for crops to grow, which I started to appreciate very quickly. Needless to say, my initial concerns were swept aside after some time.

Despite my praises above, I also noticed one significant flaw: The game feels like many other Farming and Life-Sims I have played in the past. While perfect for those unfamiliar with the genre, Wylde Flowers felt very similar to the likes of Stardew Valley and My Time at Portia. Very quickly, the game feels somewhat formulaic. You learn how to farm, fish and cook, and a good chunk of the gameplay focuses on you doing fetch quests for NPC. While this isn’t inherently a bad thing, especially since I spend most of my gaming time playing these types of games, it may start to feel dry quickly, depending on your familiarity with the genre. While introducing magic is an effective way to spice things up, the benefits aren’t immediately obvious until you dive further into its mechanics, making the first few hours feel like any other farming sim.

However, you can flip this thought very easily. While I sometimes questioned how this game is different from others, it often left me feeling thankful that I didn’t have any aggravating, brand-new game mechanics to learn. I never had a moment where I was frustrated over how to fish or mine ores. The game’s simplicity is incredibly beneficial in this way and allows you to focus on the story rather than asking yourself why you spent 10 minutes catching one fish. Just be careful with energy consumption since you run out quickly and initially have few ways to get more aside from eating cooked meals!

One point of interest I can’t shake off, though, is the lack of character customization. While many games typically allow you to make a character to play, you’re stuck as Tara Wylde throughout the entire game. Honestly, I don’t hate it, and it makes far more sense in the big picture, but I definitely would’ve appreciated some basic customization options.

Stepping back to Wylde Flowers’ story for a moment, one of the game’s aspects I appreciated the most was character interactions. I laughed a few times over some questionable comments the NPCs would make about each other. It was unexpected, it was tasteful, and occasionally, it was hilarious.

While I don’t have a whole lot more to say about that, I’ve gotten so used to dry and meaningless conversations between video game characters that seeing how they speak in this game was a breath of fresh air. The best part of all? They say and react to situations as actual people would! Who would’ve thought a small detail like this would be so great?

Likewise, while I wouldn’t consider it the game’s highlight, I really enjoy Wylde Flowers’ art style. While cartoony, it is still charming enough to captivate anyone playing it, including me. Despite some odd facial expressions and animations during cutscenes, it wasn’t uncanny valley enough to worry me too much. Instead, I added that to the tally of comedic moments, even if it wasn’t fully intended.

I definitely need to appreciate the art style and music for a moment. Filled with cheerful, relaxing music, I wasn’t too surprised when I found myself pausing my music in favor of the game’s soundtrack. There’s even voice acting! While I expected the cutscenes to have some, it was interesting to hear voices in every conversation I had with the NPCs, even during casual dialogue. I’ve seen far too many examples of games that reuse samples or skimp on voices, and Wylde Flowers certainly isn’t on that list.

I will note, though, that there were plenty of moments where your main sounds were atmospheric, nature sounds. Rather than relying on music, you get to listen to the wind blowing, wildlife flourishing, and other subtle notes that I imagine are intended to immerse you into the world. Well, it worked, and I felt plenty immersed and invested as I played the game. While it isn’t groundbreaking, you certainly won’t hear me complaining about it.

As a long-time Farming-Life Sim fan, I was initially skeptical going into this playthrough. However, I was pleasantly surprised with how much I enjoyed the cute, cartoony graphics and simplicity of the gameplay. Nothing overly complicated, no convoluted storyline or frustrating controls. While the game isn’t perfect, it was still a fun way to kill some time and enjoy what I love about the genre while avoiding what I don’t like about it.

However, you’ll have to push through a couple of hours of slow-paced gameplay following the short tutorial before getting into the good stuff. As well, if you’re someone who sits in character customization menus for 30 minutes like I am, you may be a bit disappointed over the lack thereof here. Looking past some of these minor details, though, you’ll find an enjoyable, relaxing game that ported very well from Mobile to PC.

A copy of this game was provided by the publishers for review.