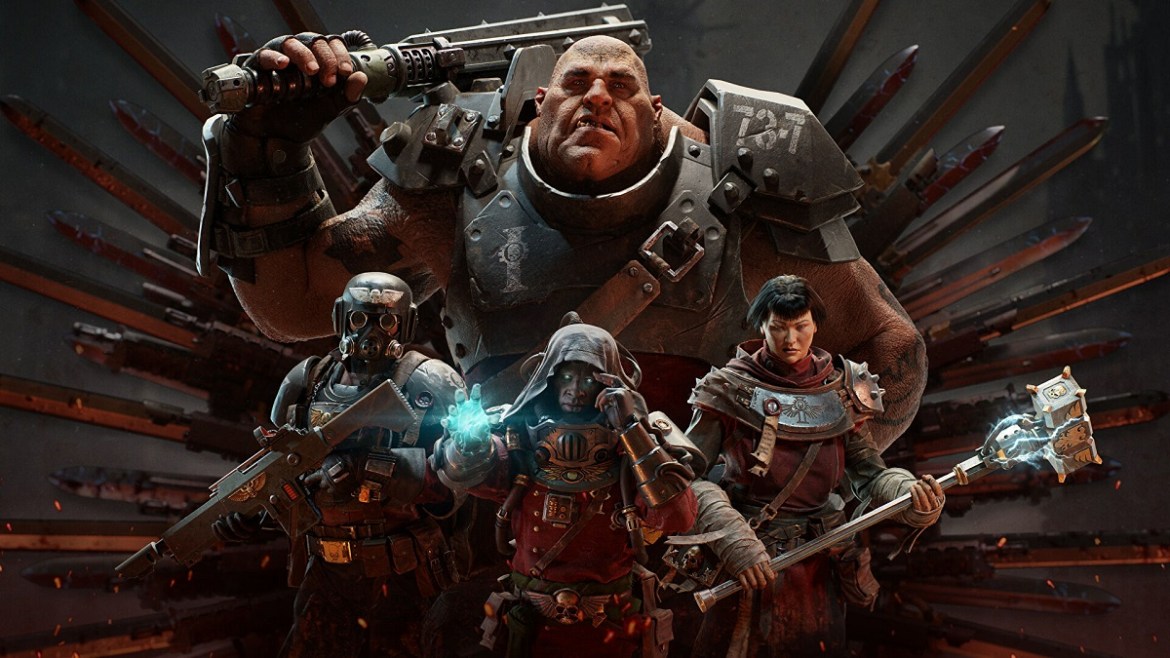 Despite my high expectations, Warhammer 40K: Darktide leaves me in a surprisingly confusing spot. I adore Fatshark’s previous title Vermintide 2 for many reasons, from its satisfying mix of melee and ranged combat to its rich world, fun characters, and great setpieces. Unlike many co-op shooters out there, it took the hole Left 4 Dead left behind and filled it well. Yet even with that, Darktide feels like it takes a few steps forward, and considerable steps back.

Darktide steps far into the future in the 41st millennium, where humanity’s spacefaring armies are endless and heretical Chaos forces are all the more numerous. Eternal war means endless supplies are required, and manufacturing planets (yes planets, not plants) are plenty. That brings us to Atoma Prime, and its central hive city Tertium, where heresy is deeply seeded in all zones. That brings us to you, a prisoner who, through a stroke of luck, has had the luck of joining the warband to take on the heresy threat. That, and be underestimated at every turn.

While it does a great job of setting up just how filthy this war-ridden society is, Darktide, unfortunately, does falter in its story and character banter. The story takes a slightly bigger focus here than in VT2, yet is utterly predictable and feels tacked on for the sake of a few cutscenes. The character banter is the larger drop in quality though, a far cry from the Ubersreik Five’s quality back-and-forth quips. While you shouldn’t expect that from a hand-crafted player character, there’s a lot more that could’ve been done to flesh them out more.

Yet even with that, characters often don’t have much different to say off of a chosen backstory. The planet of Cadia is an exception, with a few lines particularly geared to its residents. That’s it though, and almost no other backstory choice has an actual effect on dialogue. As one example, my Ogryn was a miner at heart (he was also Bardon Ogrynson, but that’s another matter entirely), and not once through my 30-level grind as him did I hear that referenced. Beyond knowing the backstory offhand, it’s a shame to see it so underutilized.

Thankfully, the flow of combat in Darktide succeeds where character development fails. The game excels at putting you up against seemingly impossible odds and giving you just the right amount of tools to get it done. Even with the increased emphasis on ranged combat over its predecessor, Darktide often feels more challenging and far more tactical. Playing around cover and working with your team to push forward is an important skill, and has made me a better player of this sort of game as a result.

Character build variety has brought much to the table as well. Ogryn is the exception to this, though the three other classes have a lot of options when it comes to excelling and even bending the game’s systems to your will. You start weak, but there’s no feeling like having a complete build with weapons and feats designed to be amazing at one specific job. It’s mostly similar to the way VT2 does things, but it’s more than welcome here regardless.

Classic 40K Franchise, Am I Right?

Unfortunately, where Darktide drops beneath its predecessor is in accessibility. As much as I’ll sing Vermintide 2’s praises for days straight, I’d be foolish to call it an easy game to understand with a lot of systems to keep track of. Darktide goes much further than that, bringing in all sorts of stat names, weapon traits, and feats that feel deliberately difficult to understand. Take the Zealot’s level 25 feat Emperor’s Execution, which grants ranged damage based on “the proximity to the target”. At first read, you might guess that’s based on how far you are, but it’s actually how close you are. As we said, confusing to understand.

That’s not including progression systems either. The process of leveling a character is fine, but trying to secure some of the best gear the game has to offer is a chore thanks to a half-complete crafting system and grindy crafting resource gathering. Cosmetics aren’t any better, with difficult, earnable cosmetics being utterly outclassed by purchasable cosmetics from the store. It’s unsurprising in this day and age, but it’s a shame to see either way.

Furthermore, optimization isn’t Darktide’s strong suit. It’s a great-looking game, don’t get me wrong, but I couldn’t begin to imagine trying to run this at minimum requirements. Even with a PC that goes slightly above recommended, I found myself making a fair few quality compromises just to run the game at 60 FPS consistently. The immense bugs don’t do it many favors too, even beyond the infinitely buggy pre-order beta. Fatshark is slowly making progress, though they very clearly have a way to go.

A Masterclass in Gothic Sci-Fi

Despite ups and downs in various aspects, one part that deserves immense praise is the atmosphere and visuals. While the setting and dialogue merely do enough to showcase how depressing the 40K setting is, it’s the visuals that truly sell it. Every piece of the world is shown with such immense detail and variety, failing to make compromises. The deepest slums are filled with all sorts of poisons that make it unsurprising as to why these people turned to heresy for comfort. Even the most regal of locations are militaristic, showing just how much war is built into society.

Jesper Kyd’s soundtrack also does perhaps one of the best jobs of portraying 40K’s vibe of any Warhammer 40K game out there, perhaps even better than Mechanicus. Many have correctly pointed out how other 40K games have great soundtracks, but never anything that feels like it only belongs in 40K. Gothic sci-fi can make for an incredible mix of sci-fi and old school, and Kyd’s tracks accentuate that incredible. If you want just a taste, Disposal Unit and Unrest in Throneside are must-listens.

At the end of the day, Warhammer 40K: Darktide is a thoroughly enjoyable experience (especially when you can run it). Its combat is truly top-notch and endlessly satisfying with varied weapons and a repertoire of beautiful tracks. At its core, it’s a 40K game, though many of the IP’s negative aspects seep through. Progression systems feel half-baked, character personality is far beneath the game’s predecessor, and it’s easily one of the least accessible co-op games in years. Still, those willing to stick with it will find Darktide to have plenty of gruesome, heretical thrills.