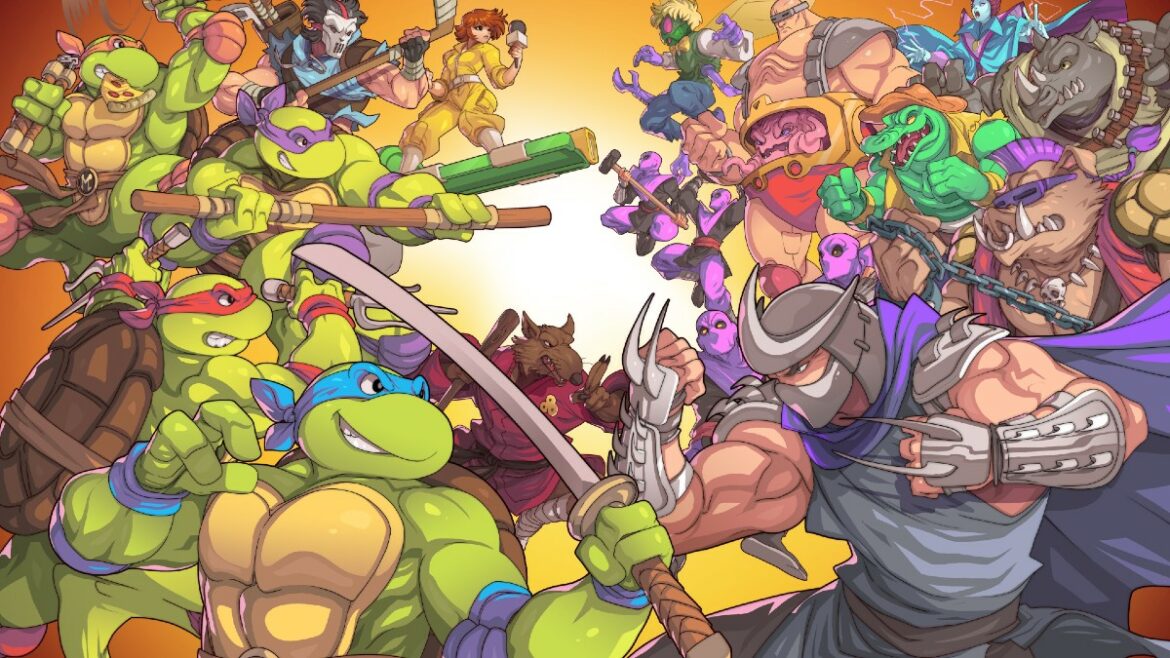 Playing Teenage Mutant Ninja Turtles: Shredder’s Revenge was a chemical reaction. Bright colors, loud music, work stress, hype, tiny details in sprite art all stirred together in my brain beaker and exploding. Obviously I had a great time, especially when the Prima Teama (all two of us) got together for a full co-op run. However, it wasn’t until I sat down to write this that it hit me. This game, this cartoon turtle ninja game, means something to me on a level I don’t fully understand. What the hell.

Developed by Tribute Games and published by Dotemu, TMNT: Shredder’s Revenge is a 2D beat ‘em up inspired largely by Konami’s suite of arcade and console games from the 80s and 90s. I guess that’s called the Cowabunga Collection now. Unlike those games, the roster has expanded beyond the TMNT and includes a story mode alongside a more traditional arcade mode. This is also the first TMNT videogame for consoles since Activision’s… interesting run with the license from 2013-2016.

Story time! The first videogame I ever played was Teenage Mutant Ninja Turtles IV: Turtles in Time on the Super Nintendo. Literally the first time in my life on this rock a videogame was beamed from a screen to my face while the controller was in my hands. I wouldn’t have any games of my own until a few years later, and while that moment was all about Donkey Kong, Turtles IV eventually made its way to my collection.

Turtles in Time is a game I always went back to, from the original cart I had, to emulation, to discovering the original arcade version and its wacky differences, to that godawful remake Ubisoft shat out, to rebuying a SNES cart. I’ve played through this thing more than any other individual game. I’ve seen the end over and over playing by myself, with friends, and with family. The experience of playing this game is burned in my brain forever.

There was nothing else like it. I knew the TMNT of course, but the game had this energy to it, a bellowing cadence and aggressive style none of my other games could match. It even felt like a departure from the cartoon I watched so much. Turns out that vibe is “arcade game,” and probably explains why I like Sonic Forces so much.

Since then my whole life has happened! I’m a grown-ass man with a wife and a kid, an ADHD diagnosis, a journalism degree and I work in video games! I’ve been at this writing thing long enough to have nearly screwed it up or quit multiple times. But Here I am at Prima, full-time and on a salary. I wrote a goddamn book! It’s almost like the first major arc of my storyline has come to a conclusion. And while I figure out what’s next, Shredder’s revenge shows up like an existential punctuation mark.

After years of rights jumping around, different genres, less popular iterations all punctuated by years of silence at a time, TMNT has returned to that Konami-style vibe. It was weird because I didn’t exactly jump out of my chair when Shredder’s Revenge was announced. But that’s because I hadn’t played it. Also occupational fatigue. At PAX East 2022, I was able to feel the game for the first time, and that’s when the waves began to crash. The connections and memories burst from my subconscious like those goofy pizza monsters.

Shredder’s Revenge has been on my mind ever since. After playing through the story mode twice I can safely say it’s the most spiritually succeeded you could probably ever expect from a spiritual successor. Those arcade and console classics form the foundation, then everything else is neatly piled on with so much boldness and love and energy. And humor! This game is funny like a TMNT has never been funny before. Of course, a TMNT brawler made by millennials portrays Foot soldiers trapped in the gig economy, working fast food, toiling in office cubicles, up to the moment the turtles come into view. Rise and grind, baby.

All the modern conventions are an attraction, sure. The sprites are detailed and excessively animated. The combat looks like a brawler but bleeds like a fighter with beefy controls, combo properties, and in some cases, loud Street Fighter homages. There are multiple modes, difficulty settings, online play, achievements, voice acting, multiple endings, challenges, and hidden secrets. The soundtrack is a series of bangers and musical surprises culminating in the literal by god Wu-Tang Clan providing a vocal boss theme.

But you can fling a Foot Soldier at the screen. Mode7 effects included. One level is called “Big Apple, 3 PM.” Getting hurt by obstacles pisses me off then makes me laugh with silly animations and VO gags. Power-ups are in Pizza boxes precariously placed to bait players into grabbing them early. The Statue of Liberty is involved and part of a huge self-own gag. The music uses those same SNES-era orchestra hits, the name of which I just learned and wish I’d looked up before I embarrassed myself trying to ask Tee Lopes about sound fonts. This doesn’t feel like just a stack of references; everything familiar is also organic, a natural evolution.

Shredder’s Revenge feels like it was made by people just like me, for whom Turtles in Time was a formative experience. It’s like a tidal wave of nostalgia crashing into technological advancements, new ideas, evolved talent, reverence, and a dash of ironic self-deprecation. This game is such a brilliant follow-up to Turtles in Time because of how it captures the passage of time for my generation. It’s a sincere expression of what “formative” means.

All this from such a ridiculous thing, a group of fuckin’ human-shaped turtles gorging themselves on pizza and fighting robots that only exist in this form because the stupid Reagan administration deregulated laws limiting advertising to children in cartoons. Now we’re all brain-poisoned forever. That’s probably bad, but at least TMNT: Shredder’s Revenge rules.