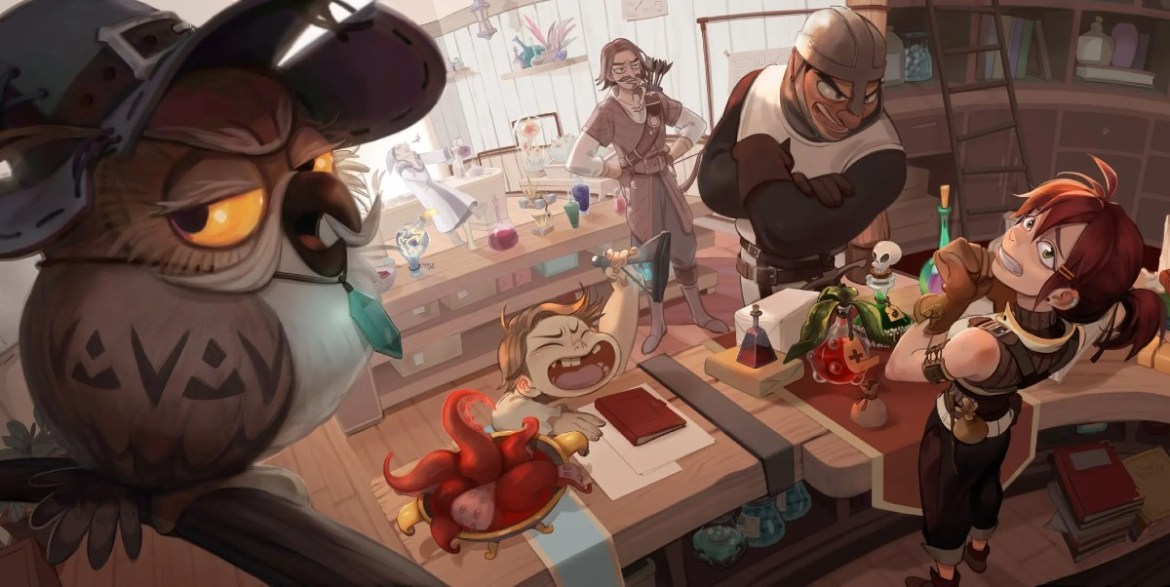 The good ol’ “life sim” fantasy in videogames. Your precious, but distant relative has left you their old farmland/shop/business and you can spruce it up and succeed at your own pace, accompanied by a cheerful soundtrack. But there’s nothing “sim” about that, is there? Harvest Moon doesn’t charge you rent, it doesn’t threaten your quaint livelihood with competition. You don’t even have to deal with asshole customers. Where’s the cynicism and dread, the failure, the rude people who treat you like scum because you’re on the wrong side of the counter?

It’s all in Potionomics, where the true life simming is ready to punch you in the face for even considering fulfilling your dead uncle’s last request. In Potionomics you thrive or die and if you don’t like it then maybe you should do what the real business moguls do and fuel your success with crimes. That’s the real shit. But this is probably the most charming possible rendition of involuntary capitalist servitude I’ve ever seen.

Basically, Potionomics is a wild whirlwind of Disney-like animation cadence, retail-traumatized millennial gallows humor, more familiar or formulaic life sim/management mechanics and roguelike card battling. What comes out of this funky blender is a funny, visually captivating and deceptively chill alchemy/shop sim that will slap your shit in if you aren’t careful. Like, “email the devs pleading for help” kind of shit-slapping, the kind I was nearly ashamed of until I learned later it wasn’t just me.

The weird thing is, Potionomics isn’t really that hard, I don’t think? It just has a pretty hard pass/fail “boss fight” at the end of its time limit structure that will simply Game Over you if you aren’t successful. And to be fair the game warns you several times it isn’t playing around. Perhaps it just doesn’t do the best job explaining what exactly you’re preparing for.

Playing this game is pretty familiar for the most part. You have your big sack of ingredients you mix for potions, a cast of wacky characters you can romance and buy stuff from and various time-slurping tasks you must manage. The visual language (and written language) is pretty clear, and for the first several hours I was plucking along, having a good time brewing potions and making money. Then the boss fight happened and Potionomics was like, “do you have these numbers?” And I was like, “well I’m pretty close, maybe!” And Potionomics was like,

I was so caught off-guard I had a hard time recalibrating. Did I play wrong that whole time? Did I get unlucky? Can I even salvage my game here or do I need to start over? Turns out Potionomics does take separate auto saves for the start of each in-game day, which is handy. But I found success in utilizing the skip function, starting over and just really paying attention to what I was accomplishing each day (plus I asked for help). Once I felt like I understood what the game was actually asking, I went in for the runback and crushed it so hard I got like three achievements.

When I first played it at PAX East, Potionomics made an excellent first impression, grabbing me with its charm, strong identity and card/haggling game “combat” hook. I wasn’t expecting it to be such a hardass at climax time, which certainly rocked my first impressions of a more happy go lucky time. That said, I’m still having a great time! I just really had to shift my whole approach to the gameplay loop.

Potionomics isn’t a “chill vibes” kind of management sim. It’s a “survive misery by being ironically miserable yourself” kind of management sim. It’s like when you work at Walmart and everything about it is terrible, but you find relief in commiserating with your coworkers. But instead of having fun talking trash and doing dangerous things like mishandling equipment or flirting, you’re doing reckless magical chemistry and trading ribs with a talking owl. And flirting.