Potion Permit and Potionomics Proved the Power of Potions at PAX 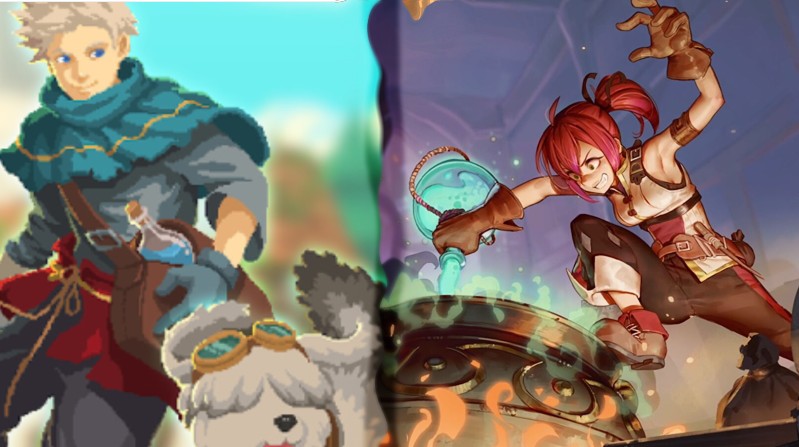 Alchemy and videogames are best buds. Really, what is alchemy if not mashing different things together for a new result? And what are videogames if not elaborate containers for crafting systems? I kid, but from Final Fantasy Tactics to the Atelier series, you never have to look far for some apothecary action. For example, I played two different games at PAX East 2022 all about potions, those classic concoctions keeping warriors alive for decades.

The first game I played was Potionomics, published by XSEED and developed by Voracious Games. This game was a strange but intriguing announcement back at the first New Game Plus Expo (if I remember correctly) when the gaming world was just figuring the pandemic thing out. Now we’re still in a pandemic but hey, I got to play this game in person. Sure I had to jam cotton swabs up my nostrils every day since I returned home, but videogames!

Potionomics is, at its core, one of those turn-based deck-buildy games like Slay the Spire. But it isn’t a roguelike, and isn’t necessarily about getting your ass kicked. It has more of a Harvest Moon/Story of Seasons vibe, presenting a colorful world, a more relatable goal (run a shop!) and of course dating. Like the older Harvest Moon games, Potionomics has a “time limit” of sorts, but a developer told me the game isn’t designed to punish people for making mistakes.

The meat of the demo I played was brewing potions and attempting to sell them to weirdos you’d typically run into (or play as!) in RPG games. The card “battles” took the form of haggling, which sees the player trying to hype up their products (and jack the price) while rubbing against customers’ patience and attitudes. Cards would do things like boost an item’s value, shield me from “stress” damage, or simply close out the sale.

It seemed like Potionomics wanted me to push as much as I could, then make the deal as soon as things start to collapse. It was fun, felt distinct and had some of the most intricate character animation I’ve seen in a game like this. Unfortunately the release window is fall 2022, so I have to wait a while to play more.

The second item-driven RPG I played was Potion Permit, published by PQube and developed by MassHive Media. While Potionomics almost looked like a cross between anime and a Dreamworks animation, Potion Permit looked like an old school JRPG. In this one, you play (and customize) a doctor moving into a small village outside of a larger urban city. And while the residents need a doctor, they are not thrilled about an alchemist from the state occupying that spot.

The early storytelling does an excellent job hinting at some socio-political drama, giving hints that were simple, but had me eager to learn more. Why is this village so isolated, and why are they so acrimonious toward a doctor from the “Medical Association?” Something happened here, and I will break rocks and brew medicine for as long as I need to find out.

It’s funny, because for such an ominous setup, Potion Permit is otherwise very bright and colorful. The main character has a dog friend waddling along with them, and most of the people look like the usual jovial life sim NPCs. Just starting out, you’re really just doing what you’d expect in a game like this: chopping trees, breaking rocks and gathering plants.

Potion Permit seems like a nice-looking, very laid-back game with a Prima Certified Dodge Roll and a crafting system that’d be right at home in an Atelier sequel. It seems like an all-around nice time (no time limit pushing you to be efficient) with a story about something a little less nice.

There’s a closed beta running right now for Potion Permit, but the full game is currently aiming for a simple 2022 release window. Hopefully the team is able to meet that goal, mostly because I want to find out what happens!