Would you risk it all for those you love? 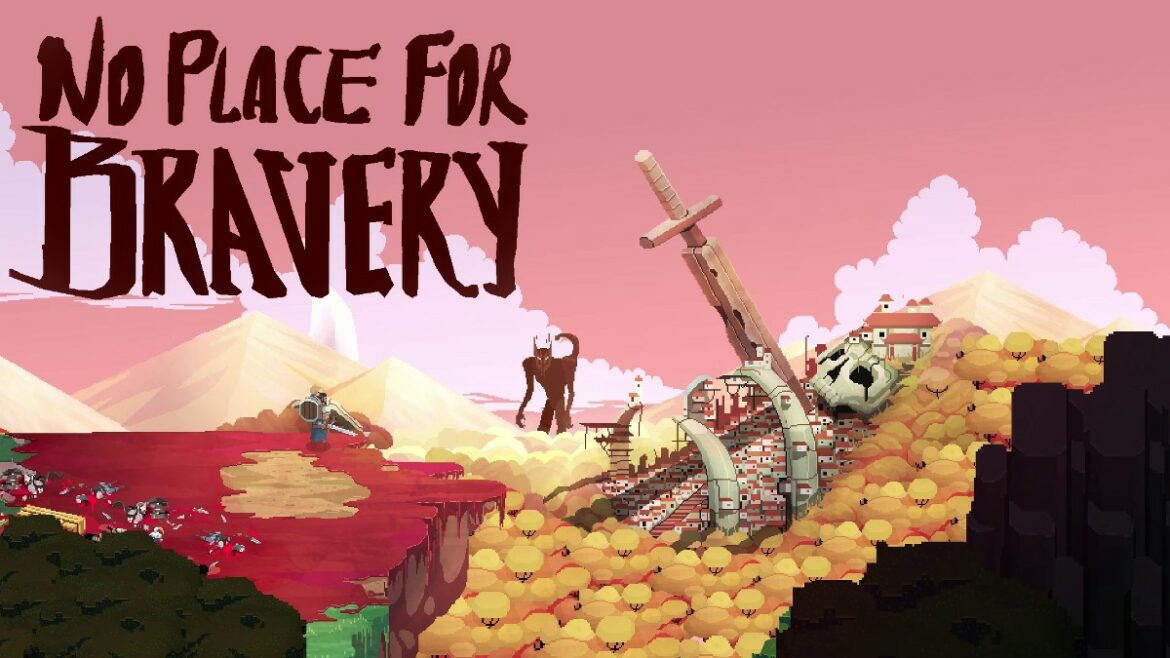 Thorn, a once mighty member of the Old Order and one of the few remaining Guardians of the world of Dewr, now lives a quiet life in the town of Ossuary. It was a normal day, like any other, when he and his daughter Leaf were enjoying a friendly hunting competition together on the outskirts of town – until tragedy struck. In front of their very eyes spawned demonic, other-worldly beings known as Helwyr, who began their rampage of Ossuary, prompting Leaf to run home to rescue her defenseless mother. Before she’s able to reach the gates of Ossuary, Leaf is captured by The Warlock, an ominous entity of terror, who vanishes in front of a distraught Thorn.

And then he wakes up. It’s been 10 years since Leaf went missing, but the nightmares never go away.

No Place For Bravery is developer Glitch Factory’s newest creation, mixing methodical, bloody combat with a lore-filled narrative that asks of you, “How far are you willing to take this?”

No Place For Bravery — Melodies of Misery

Before you even begin a new game in No Place For Bravery, the mood is already being set with its chilling title screen. Foreboding notes played by old Folk strings invite you in as tribal drums beat in the distance. A chorus harmonizes over the croons of Mongolian throat singing while an image of a lush field with flowing blades of grass and carefree butterflies convinces you that everything’s alright.. but something feels off. A sense of devastation looms as you prepare to begin your journey as Thorn.

This trend doesn’t stop there, as the game’s soundtrack sticks to a theme that makes you feel like each song is a representation of Thorn’s inner monologue. To put it simply – the soundtrack is great. Eduardo Zolhof, Music Composer and Sound Designer at Glitch Factory, delivers a handful of tracks that seem to carry the weight of Thorn’s emotions, from despair and hopelessness to anger and aspiration. I found myself idling in certain zones just to enjoy certain tracks before moving forward.

No Place For Bravery — Pretty Pixels of Perfection

I’ll admit it – I’m a sucker for pixelated graphics. Growing up in the 16-bit days of the Super Nintendo and Sega Genesis systems cemented a little spot in my heart for any games that attempt to recreate the magic of the old days. Games like Acid Nerve’s Titan Souls and Heart Machine’s Hyper Light Drifter are examples of titles that are pretty much an instant buy for me, regardless if they end up being good or not (they’re both good and you should play them).

No Place For Bravery sports stylized, 2D sprites with fluid, animated backgrounds and foregrounds that make every scene appear stunning and alive. Of course, with much higher resolutions and a wider range of colors available compared to titles of the 1990s, the environment and effects around it shine even brighter than what we could have imagined in the past. Colors are vibrant, areas and landmarks are meticulously detailed, and the blood is very, very red.

No Place For Bravery — If It Moves, It Bleeds

Combat in No Place For Bravery consists of methodical melee battles where you’ll be timing your Parrying ability against enemies in an effort to whittle down their guard until finally breaking it – exposing them to critical damage. If you’ve played Sekiro: Shadows Die Twice, this should sound pretty familiar to you. To add another dash of FromSoftware inspiration, you’ll have a Dodge ability that gains a small window of invulnerability frames shortly after the early stages of the game, making any Souls-like fan feel right at home, albeit on a two-dimensional playing field.

Hey, I’m just as annoyed as you when every game with slightly difficult combat is compared to FromSoftware’s catalog, but Glitch Factory themselves boast “Brutal Sekiro-esque 2D Combat” right on the game’s official Steam page. Don’t shoot the messenger.

Unfortunately, all these tactics you’ve learned to take down hordes of enemies and tough bosses seem to go out the window once you obtain the third main weapon in the game – the Arbalest. This incredibly accurate crossbow with effectively infinite ammo seems to trivialize the remainder of the enemies you encounter in the rest of your journey. Perhaps I should have bumped the difficulty up a notch or two because once I found the Arbalest, I found myself able to essentially cheese my way through what I’m assuming were hard boss battles. A shame, really, because when the combat in No Place For Bravery is good, it’s good – and when it’s not good, well, you just pull out the Arbalest.

No Place For Bravery — A Glitch in the System

Unfortunately, the developers’ decision to name themselves Glitch Factory hits a little too close to home, as No Place For Bravery contains a handful of irritating bugs that sometimes caused my playthrough to come to a screeching halt.

Immediately upon launching, the game couldn’t decide which resolution it wanted to remain at. I use a 2k resolution monitor so, naturally, I’d want to play the game at 2560×1440 pixels, yet No Place For Bravery seemed to insist that I play at 4k. Even setting the resolution on the title screen wouldn’t matter, as it would revert back to 4k as soon as my save file loaded, prompting me to set it again once I was in-game. At one point, the constant switching of display resolutions between the main menu and the game world caused repeated crashes, and I was forced to reinstall and launch the game on a different monitor until I could get it adjusted and working for my main display.

Other times, I would encounter glitches that would require me to Alt-F4 out of the game, as I would be unable to access any of the game’s menus or move my character at all. I found myself stuck after loading into a new zone, still hearing the soundtrack and watching Thorn’s idling animation, yet unable to register any button commands to continue playing. Another instance had my character’s sprite cloned during a cutscene, which persisted even after the scene was over, causing the camera to be focused on my clone and rendering me unable to progress towards the next zone.

No Place For Bravery — Cause and Effect

Ultimately, No Place For Bravery is a story about choices and the consequences that arise as a result. From the choices Thorn made in his past, to his present life, to the future choices you make for him as the player. Every decision in Thorn’s history has led him to where he is, the company that surrounds him, and the motivations that haunt him. No Place For Bravery gives the player a sense of control with its narrative – sometimes even presenting them with a dialogue option that could very well end the game at that moment. It’s that kind of weight attached to each decision made that immerses the player with a sort of responsibility for their actions. Events occur and people die because you chose to go on. The plot continues because you make it continue.

With that being said, your first choice is right in front of you — Will you play No Place For Bravery?