Logitech G Cloud is a Fascinating Device for Ultra-Specific Users

I love this thing like I love the PlayStation Vita. If that sounds like a warning, well, yeah 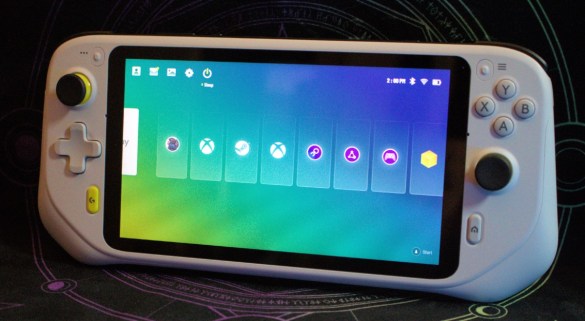 I spent a fair amount of 2022 trying to get handheld coverage off the ground at Prima Games, and 2023 is starting with a real bang in that department. We’re starting things off with a review of the Logitech G Cloud, which I’ve been spending several weeks playing after Logitech sent us a unit. This is a strange device for sure, as many reviews that dropped when this thing first came out attested to. And the folks behind the G Cloud are well aware of the response so far, which has provided an interesting lens through which to approach my own take. Which is still, admittedly, a little confused.

The conceit here is admirable. The games industry is pushing into cloud-based game streaming, removing the need for powerful hardware needed to run the latest blockbuster AAA titles of Current Year. So why not, in the age of handheld PCs becoming more and more viable, drop something that looks like a duck but quacks like an airplane? Or something like that. The Logitech G Cloud looks like a premium PC/handheld hybrid along the lines of the Steam Deck, but leverages cloud game streaming to eliminate the need for specialized, expensive parts.

Related: 2022 Gift Guide for Console Gamers on the Go

And in a vacuum, this thing succeeds and then some. It’s significantly lighter and thinner than a Steam Deck, has a gorgeous 1080p screen and plays a (on paper) wider variety of games. You can’t play something like The Callisto Protocol at max settings on a Steam Deck, but you sure can stream it to your G Cloud through services like Boosteroid! I mean, you probably don’t wanna play The Callisto Protocol anyway (with some exceptions), but it’s a good example.

The problem is that cloud gaming on this level requires a bunch of external circumstances that many gamers simply won’t have access to. You need not only a great, solid and consistent internet connection, but you need one without a data cap. You also need access to games, which comes in the form of different, competing subscription services. And those services vary wildly in selection and quality, and in the time between the G Cloud launching and now, one of the big ones (Stadia) is donezo. Others are either still developing, weirdly expensive or don’t even work great with the device.

For example, yeah, the screen is gorgeous, but only a few services can hit 1080p consistently, even with ideal connection environments. Sony’s PlayStation Plus app hasn’t made it back to mobile since the rebranding, and PlayStation Remote Play doesn’t recognize the G Cloud’s buttons as a controller (a paid third-party app does work, though). Even some native Android apps have trouble recognizing the G Cloud’s buttons as a controller, which is just bizarre. Xbox Cloud Streaming is the service with the most consistent (and advertised) compatibility, but that’s also the biggest service lagging behind others in quality.

And the hardware itself is underpowered compared to similar hardware. When it comes to things the G Cloud really excels at, Android apps and emulation, you’ll run into technical snags that feel weird considering how much Logitech has to charge. To be fair the Steam Deck has an unfair advantage here, but other aspects of the G Cloud don’t make up for it all the way. The battery life and weight are both huge plusses, of course, but flimsier sticks and buttons make certain games feel almost unplayable. For example, I’m pretty sure I actually broke the left stick slightly after a couple rounds of MultiVersus. And trying to play fighting games like Dragon Ball FighterZ with the dpad was just not happening.

All that being said, there’s definitely a lot of good points. That screen is super nice, and anything that runs competently on the G Cloud looks amazing. Playing apps that work well such as anything from Square Enix of Punishing Gray Raven is an awesome experience. Emulation is mostly great, although consoles like GameCube and PlayStation 2 are inconsistent to say the least. And according to savvier users there are actually software barriers making that happen, which is a huge bummer. Having already lower-powered hardware arbitrarily limited is a strange choice.

Ultimately if you’re all in on cloud gaming and budget isn’t an issue, the Logitech G Cloud is pretty dope. It’s easy to use, lightweight, the battery life is incredible and has a screen that makes the Steam Deck look like a toy. What holds it back are inconsistent capabilities, strong reliance on external factors and, of course, the price tag. The team behind this thing are dedicated to this space though, and if Logitech keeps supporting this venture long-term, I can see a second or third iteration of the G Cloud really being something special. But that’s assuming ISPs also play ball more and services like Nvidia GeForce Now don’t evaporate like Stadia.

It’s a big ol’ mixed bag, one that’s full of novelty and cool shit, but just as full of drawbacks. It’s hard to justify getting one of these unless it squarely fits your interests. If you aren’t a cloud gaming evangelist or just a fan of collecting interesting handhelds, you’ll be better off looking elsewhere. But if there is a spot on your shelf for the G Cloud, there’s a lot of potential and fun to be had.