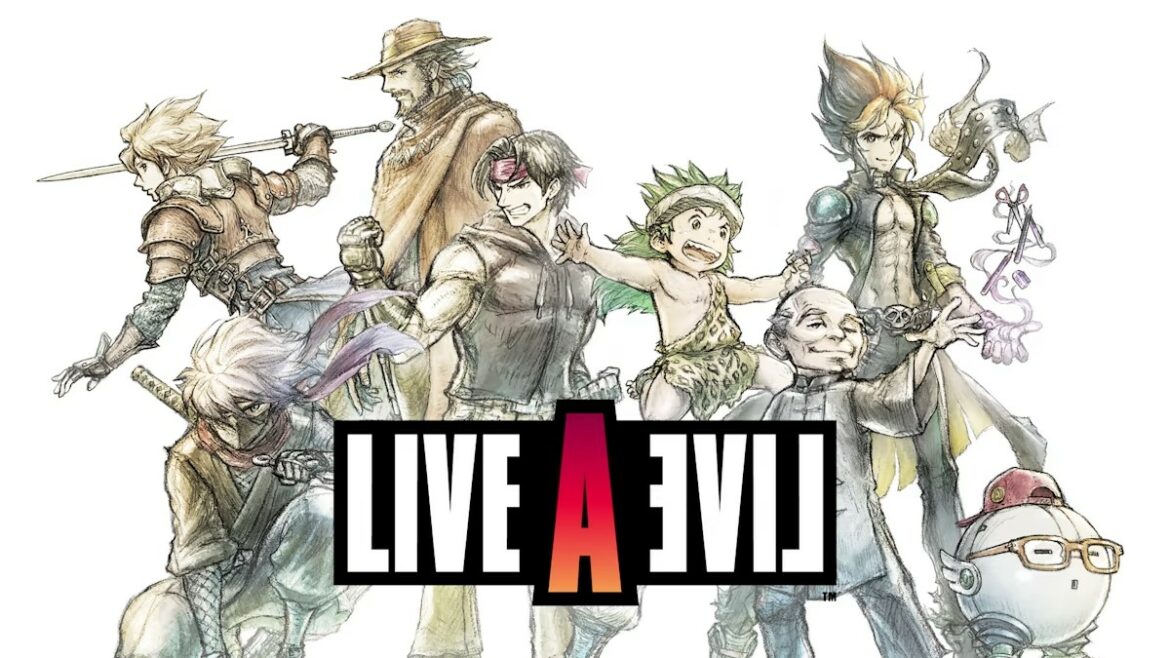 Anthology storytelling is really important to me. This is the part where I mention I have ADHD (again)! But seriously, as someone who struggles to read an entire book in any reasonable time, collections of short stories are invaluable. And it’s a real bummer you don’t see the format very often in games. But you can always count on Square Enix to try things nobody else does, especially 90s-era Squaresoft.

Live A Live has always been one of Those Games, the ones that were never localized in English but adored by almost all who played it. That made it an early target for fan translations and is one of the biggest deals alongside the likes of Final Fantasy V and Bahamut Lagoon. Also Squaresoft games, naturally. Gaming has changed a lot since then, so here we are with a physical, localized Live A Live remake published by Nintendo. In the same month a new “Xeno” game and Digimon visual novel/SRPG hybrid launched. Jesus.

The most striking aspect of Live A Live is its wild cast. It’s like a bullet list of genre fiction, from spaghetti westerns to hard sci-fi horror. The only playable woman is optional, which is weird, but also it’s a Super Famicom game from 1994 so we can’t say we’re shocked. Anyway, this isn’t like a weird ensemble cast of weirdos like you’d see in Chrono Trigger or Suikoden. Instead, each character is the lead of their own short story set in a different time and/or place.

What this means is the original creators had to make a set of individual JRPGs that had to be interesting within around three hours each. That’s roughly the time it takes to grind up your first set of equipment in Dragon Quest. But we didn’t just get differing plots; each story or Chapter also has a distinct gameplay hook on top of the more familiar grid-based combat.

Sometimes the differences are structural, sometimes there are bespoke mechanics and sometimes it’s simply an aesthetic gimmick strong enough to reframe the experience. For the most part, each chapter’s gimmicks are thoughtfully related to their stories, enhancing not just the narrative but the sense of separation and distinctness between each Chapter. Even if the differences are small, the impact on the vibes is huge.

Except for the Ninja. Everything about the Ninja part sucked. Actually, the boss was pretty cool. But everything else? Mid.

One may wonder how these disparate stories are tied together. Because that’s always the question in games like this. Later attempts such as SaGa Frontier or more recently Octopath Traveler went out of their way to answer that question clearly. And that makes many players more willing to jump in, for some reason. Me? I was stoked to have a 30-40 hour game broken up like this so definitively. It was really like reading a real-life anthology book, which often comprises totally unrelated stories by various authors, connected by a theme or even just a genre.

That said, Live A Live does connect all the stories. But in a clever way that maintains the anthology structure, with a final story that brings everything together but definitely has its own premise, message, and conclusion. Spoiler concerns prevent me from saying more, but it’s good stuff. Trust me.

Weirdly enough, the one complaint I have concerns the visuals. But it’s one of those 2D-HD joints, which was one of the shining elements for both Octopath Traveler and Triangle Strategy. So what gives? It took me a while to put my finger on it, but I think I understand why it lost me in Live A Live. Since it’s a remake, the 2D-HD effect had to be retrofitted onto a Super Famicom game. The other two in the “series” were built from the ground up, designed for this toolset. And I don’t think a SNES-style world translates well to 3D when it’s literally from an actual SNES game. Daytime/outdoor scenes especially suffer from a weird vibe. It’s something about the way the colors and objects translate to polygons against the character sprites that makes everything look… fake?

Yes, it’s weird to say elements in a 2D videogame look “fake.” But I mean in the fiction sense. In Octopath or Triangle, everything felt cohesive and natural. But here it’s less organic. The sense of place or a world existing within itself doesn’t come together, and I mean in each chapter individually. I don’t know what the answer to this is, but I hope I don’t feel the same way with Dragon Quest III.

Live A Live is easily an instant classic for me, a JRPG experience that will remain memorable for a long time. I can see why it had such cult status in the emulation/translation scenes. I may even say it’s one of my favorite games of the year, but I guess I’m talking about 1994, technically. In this game you’ll find a collection of stories that are smart, compelling, strange, and silly, all told using genre tropes as tools rather than instructions. The gameplay gimmicks don’t always hit, but they do keep you on your toes. And the payoff at the end is wild, using classic JRPG elements as not a tool, but a weapon.