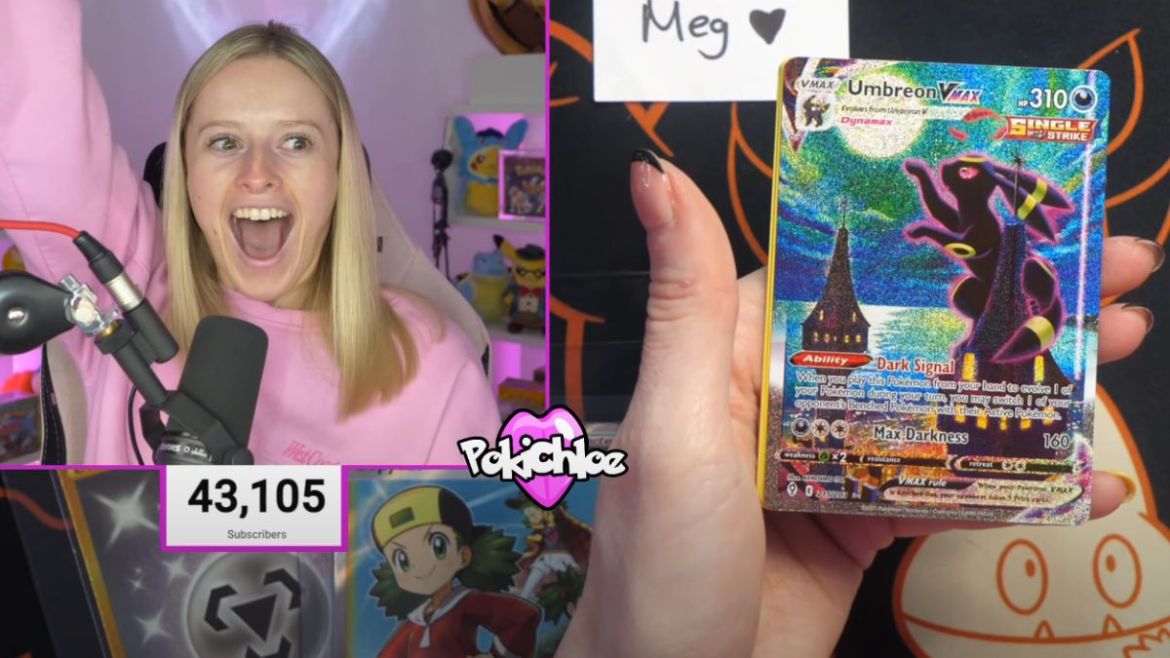 Ever had Pokemon card FOMO when you buy a $50 Elite Trainer Box and get no pulls? Because same. That isn’t the case for British Pokemon YouTuber PokiChloe, though, who managed to pull the best set of cards from the 2021 Sword & Shield Evolving Skies expansion during a livestream on November 2, 2022. Even better, they’re worth thousands.

If you’re familiar with Evolving Skies, you’ll know that the set has some of the best alternate arts in the Sword & Shield era. Some collectors can spend thousands and not get a single one. Not Chloe, though, who pulled not one, not two, not three… But FIVE of the alternate art Umbreon cards during a single broadcast. Yeah, you read that right. And if this doesn’t seem impressive to you, note that the alt art is currently going for around $650 on eBay ungraded. Multiply that by five.

Now, it needs to be stated that I myself bought into this opening. And I myself am now the proud owner of one of these “Moonbreons”, just for full transparency (peep the header image). Mine came around 20 minutes after the first one was pulled, and three more came after mine. Which is why I just had to report on it. Usually, I wouldn’t, but wow. Even pulling just one is an amazing feat, but PokiChloe decided that wasn’t enough.

If that wasn’t impressive enough, she then went on to pull the alternate art Rayquaza right after pulling the fifth Umbreon, leaving viewers speechless with the ultimate luck. And two other Eeveelution alt arts before that. “This is definitely, I think, the all-time craziest opening we’ve ever done on the channel,” the YouTuber exclaimed, out of breath from all of the yelling after pulling hit after hit after hit.

This isn’t the first time that Chloe has pulled multiple rare cards during a livestream, either. In 2021, she made headlines after pulling three of the Shiny Charizard from Shining Fates. So pretty much the takeaway from this is that she needs to buy a lottery ticket ASAP because damn.