Guess who's not going to Hollywood? PlayStation 4 players. 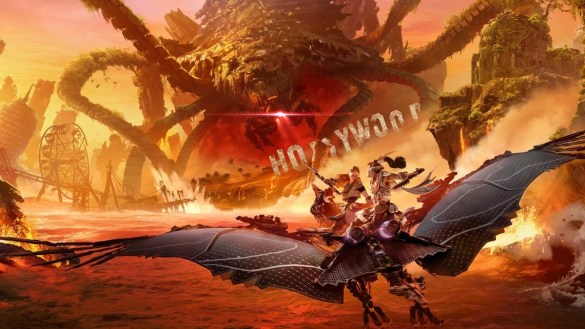 At this year’s The Game Awards event, a trailer for the first DLC for Horizon Forbidden West was shown. The Burning Shores expansion for Guerrilla Games’ second Horizon games sees Aloy on yet another grand adventure, this time set in the location of a ruined Los Angeles, all with the Hollywood sign that somehow survived – only to be promptly destroyed by a giant awakened war robot that represents one of the region’s most prominent threats alongside the active volcano. The coast of Los Angeles has now become a volcanic area, hence the name of the expansion.

Related: Difference Between Explorer and Guided in Horizon Forbidden West

For now, we don’t have many additional details about all the contents of this expansion, which arrives on April 19 only on PlayStation 5. But hold on, wasn’t Forbidden West on PlayStation 4 too? Well, the authors from Guerrilla Games stated that due to the “grand vision” they have for this ambitious expansion, they cannot publish it on old hardware such as the PlayStation 4.

Not wanting to be bogged down by 2013’s ancient hardware is understandable. Still, the problem lies in the large number of Horizon Forbidden West players who will not be able to continue their game in the expansion because they have not yet acquired a PlayStation 5. Those who have can quickly transfer their save file and continue playing on the new hardware.