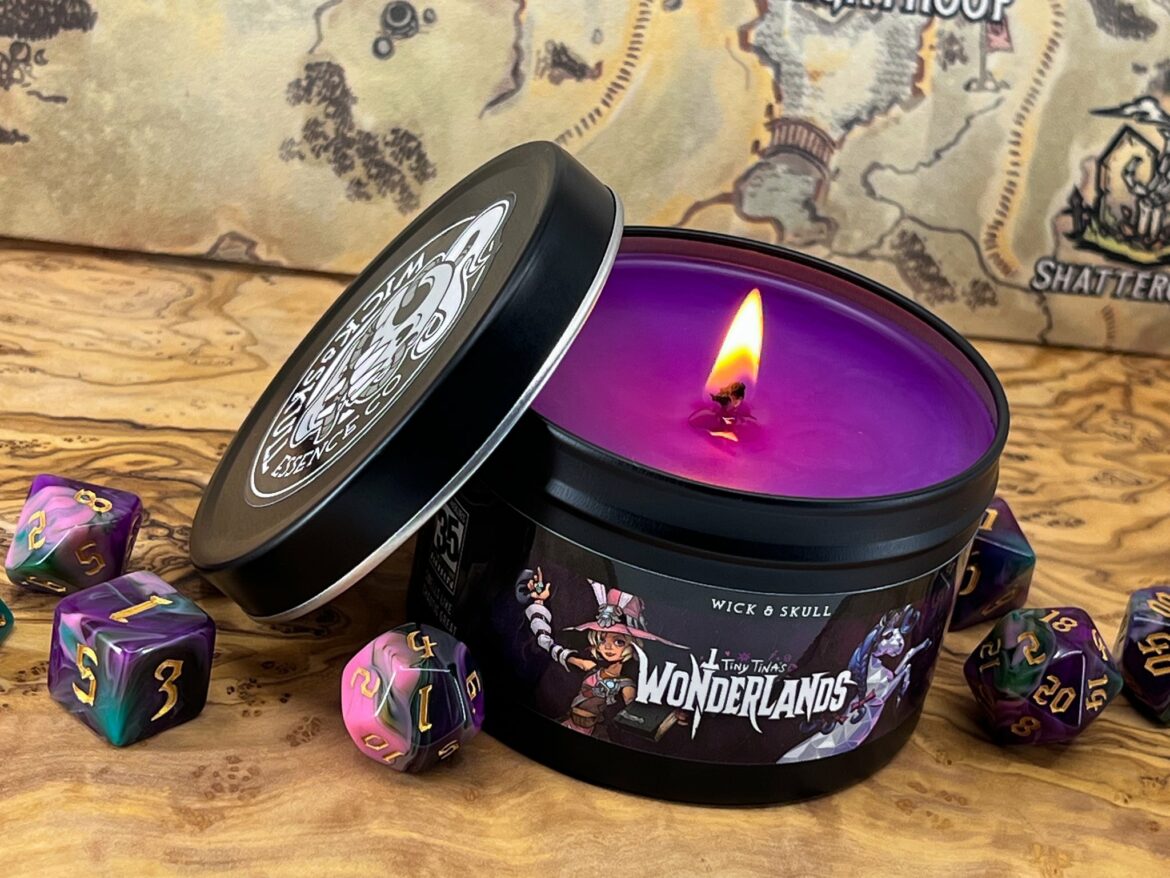 I recently was sent over some newly branded video game candles from the company Wick & Skull. These candles ranged from games like Dead by Daylight to Tiny Tina’s Wonderlands. At first, I wasn’t really sure what video game-themed candles would smell like; obviously, our first thought was Mountain Dew and Doritos, but that thought fell by the wayside quickly.

First off, the packaging on the candles is quite lovely. A small, compact candle with some artwork and information around the circular tin and the company logo on top. Each candle has a rough burn time of about 35 hours, making them great for long gaming sessions or just if you need to relax after a long day.

I played various games while using these scented candles to see if they would enhance my gaming skills; here’s how it went.

Over the past week, some friends and I played the Overwatch 2 beta, and I decided to light the Tiny Tina’s Wonderlands candle to set the mood. While I had varying degrees of success over a five-hour period in Overwatch, the candle remained a constant source of relaxation with its calming scents that didn’t overpower my tiny Brooklyn apartment. I saw no tangible increase in my gaming ability with or without the candle present. However, there was something mesmerizing about the melting purple wax while the candle burned.

After Overwatch, I switched to the critically acclaimed MMORPG Final Fantasy XIV, which feels like home every time I come back. Naturally, I burned the Dead by Daylight Hex Totem candle, which is advertised to smell like “Smoke, Leather, and Amber.” It certainly had a more rustic feel and reminded me of an Inn with natural wood ceilings and floors. The advertising on this candle makes it sound more intense than the scent actually is.

Did it make me a better gamer, though? No, my team and I repeatedly got crushed in the new PvP Crystalline Conflict mode. At least my room now smells like two different candles and not the smell of defeat.

I decided to call it a night after this and try again in the morning. The next day I recruited my roommate to test out one of the Call of Duty candles, specifically the “Nuketown” one, while he played through the end of Horizon Forbidden West. The candle wasn’t overpowering, which I was afraid of, and left our apartment smelling much better than it did previously.

Did it make my roommate a better gamer? Well, he finished Horizon Forbidden West, so you tell me.

Finally, I burned the Call of Duty Warzone Pacific one when some friends were over the other night. We didn’t play any games, but I’ve grown quite accustomed to these candles and I think the biggest boon for them is their level of scent. They don’t overpower a room like when you walk past a Yankee Candle in the mall. Warzone Pacific had a malibu vibe to it, and indeed passed the vibe check with company over.

Each one has a distinct vibe and helps set an atmosphere, as someone who often owns too many candles, preferably two or three wicks. These single wick candles have pleasantly surprised me, and I can easily recommend them to anyone looking to pick them up for themselves or even as a gift for friends or family members.

My roommate and I did try to create a summoning circle with them after he finished Horizon Forbidden West, but no tangible change occurred, so don’t take the Dead by Daylight vibes too seriously.