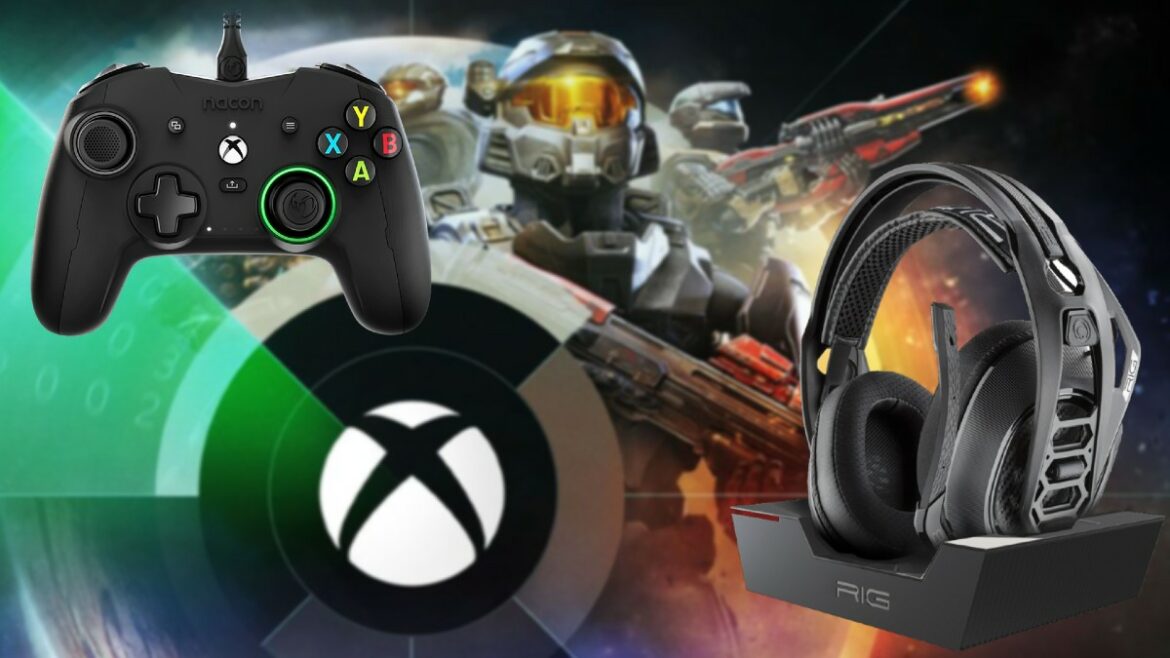 Around this time last year, Nacon sent me a controller and headset duo that may as well have literally been a packaged set. They weren’t of course, but the two devices were totally complementary. A year later I’ve been sent a new pair of devices, super similar but with bigger numbers and more features. These devices are the RIG 800 PRO HX headset designed for Xbox and PC, and the Revolution X Pro Controller, also for Xbox and PC. Every device has its snaggles, and some show up here. But overall? I hope they can both last me a long time because I love using them.

I’ll be blunt: the last RIG headset broke a few months after the review. But I found it like that, so it’s just as likely there’s an external, potentially fuzzy culprit to blame instead of the headset’s make. Anyway, it was a real bummer, especially because those ear cups felt so nice. So yeah, that’s a welcome return to the ol’ work desk.

For the most part, the 800 feels like I remember the 500 in my hands. It has a similar size adjustment mechanism, the ear cups and mic look pretty much the same, and the band in the middle stretches super effortlessly. These headsets are the best I’ve ever used in terms of comfort, that much is certain. The parts along the side you can pop in and out for larger adjustments still make me afraid I’m gonna break something though, but so far so good.

The headset’s general design, shape and feel are great! But there are a couple weird parts as well. For one, the microphone included is tilt to mute, but not removable. The 500 let me yank that bad boy out, so it’s a weird and very noticeable difference. That said, It’s discrete so with it turned up I don’t know it’s there. There’s also a charging stand, which actually looks pretty slick and has a little nook for the USB receiver. But it uses micro USB?

The headset itself also has a micro USB port for a direct charge, making it stand out among every other headset I’ve used in the past year or so. I imagine both of these matters have legitimate reasons, but on the ignorant end user side it’s weird. If cable management is a super serious issue to you, the 800 PRO might be a bit of an issue.

While there are some design questions, the best thing about this headset is its built-in Dolby Atmos license. Last year, the 500 came with Atmos as well, but it was a finite subscription code. Here it’s just permanent and out of the box, so you don’t have to think about it. That brings the headset in line with Nacon’s controllers, which is awesome. If pricing on gamer headsets is a problem, here’s a real incentive due to the Dolby relationship. And speaking of controllers…

This controller, y’all. This controller is the real shit. I love this thing. I had mixed feelings about the last Nacon controller I spent time with. The shape was weird, my hands didn’t like the sticks and it attracted hand yuck like flypaper. This guy addresses all of that and then some. The Revolution X is one of the best third-party controllers I’ve ever used.

This is a black controller with grip on the sides of the handles, instead of across the back where all your natural Gamer Goo likes to go. It’s just a little bit thicker than the PRO Compact, making it fit into my hands more naturally without sacrificing the smaller form hook. The buttons are tweaked a little and the right stick feels much less flimsy. I haven’t accidentally pressed R3 at all. As a bonus, while Revolution X is not wireless, the cable is a simple USB C attachment making storage a non-issue. It comes with a case, too.

The case holds more than just the controller. There are also some modular parts you can play around with to make minor adjustments. The most novel part is a set of weights you can pop into the handles, giving you the options to add 10g, 14g or 16g to the weight. You also get a set of convex stick caps, and a set of… metal rings you can use to adjust the sticks’ shaft size? I’ve never thought about that part of a controller in my life, but it makes a huge difference! And it’s all super easy to adjust; the sick caps pop right off, the weights pop right out and the stick shafts… they don’t pop but they do just slide over the existing piece.

A set of four extra buttons are also on the Revolution X, along the inside of the handles. I don’t really care for them, but that’s because I don’t have a use case yet. Otherwise they’re unobtrusive, and don’t seem to have a default value so pressing them accidentally doesn’t do anything.

That’s the hardware, but the software is also really cool! You can set up and store four different profiles on the Revolution X, in addition to the default. Profiles include button mapping, some serious stick minutiae, and even a silly little ring of light around the right stick. That’s on top of the Dolby Atmos inclusion, which you already know how I feel about.

So that’s where we’re at with the marquee RIG controller and headset offerings from Nacon. The Revolution X controller is some seriously sick hardware, with customization options that don’t match the Xbox One Elites but don’t cost as much either. The RIG 800 is a super solid, extremely comfortable headset that rights the major wrong from the 500 by including a full Dolby Atmos license. I’m a little confused by the mic I can’t remove and the micro USB power, but overall I’m into it.

Both items were provided by the manufacturer for review