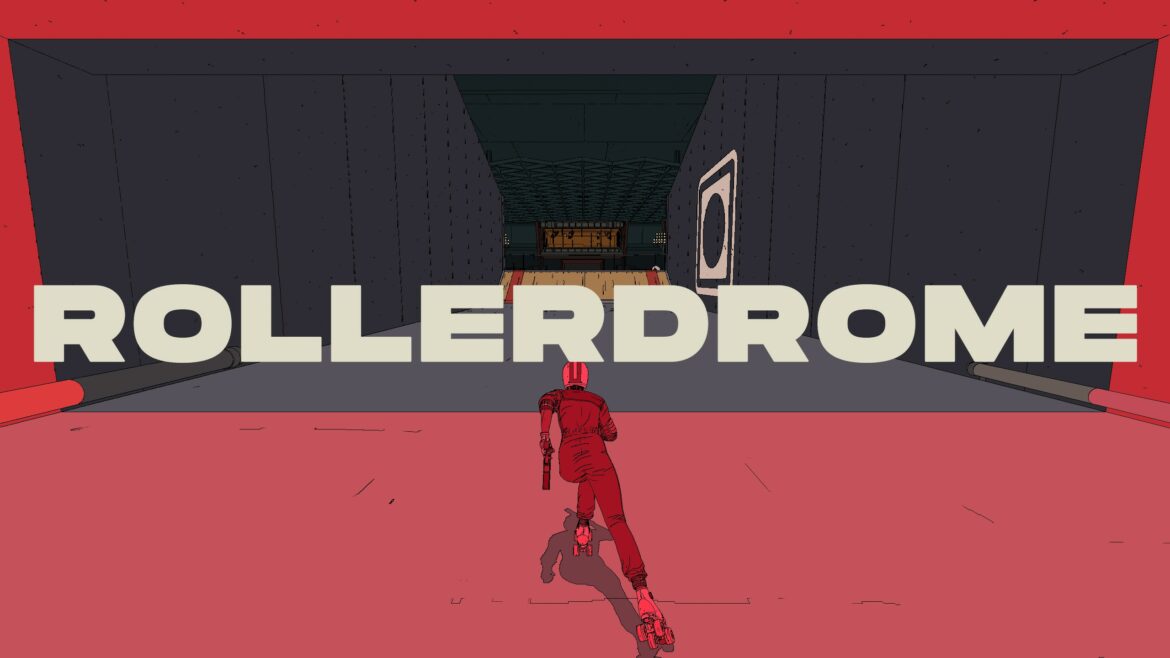 In a world where so many games are vying for players’ attention, having a solid initial hook can separate one game from the pile of new releases every day. Rollerdrome’s elevator pitch pushes it to the top of the pile. What if we made Tony Hawk’s Pro Skater but gave you a bunch of guns?

I played a solid chunk of Rollerdrome, and I’m here to say it absolutely rips. While I only played the first six levels, it never let up on the gas, constantly upping the ante in every level.

Rollerdrome puts you in the skates of Kara, a new competitor in the yearly bloodsport competition. In a world where this high-octane roller skate death sport is the highest viewed sport in the world, it’s up to you to make your way through the ranks and become the Rollerdrome champion.

Each level is accompanied by a list of Tony Hawk Pro Skater-like challenges for players to complete as they try to survive and decimate the enemies in the arena. These challenges range from collecting five combo tokens scattered around the level to defeating enemies under specific parameters.

I started the game with a simple set of dual pistols, and as the levels progressed, my arsenal grew along with it, gaining a shotgun and grenade launcher in the later part of the preview. The shotgun is a standout weapon in my time with the preview build. Its unique slug shot mechanic requires players to time their shots when the indicator lines clash, creating a rhythm to all of your shots.

While skating around the arena, you have to master spinning multiple plates at the same time. You’ll need to land sick tricks and flips between shooting enemies and dodging attacks to refill your ammo. This puts an exciting balance between the actual skating component and combat.

As the game escalates, you’ll go from dealing with low-level grunts to more complex encounters with a mix of snipers, guards with riot shields, multi-rocket shooting warheads, and more.

Learning to dodge incoming attacks with your dodge roll can be the difference between life and death. Waiting for the perfectly timed sniper shot to execute a perfect dodge will give you some ammo back in your chamber, giving every enemy attack a sense of urgency.

As you roll around the arena, you’ll auto-target the nearest enemy to make combat more approachable and flow, but you can use the Reflex Time mechanic to slow time down, giving you more fine tuning with your shots. Knowing when to use your Reflex Time can help string together sick combos and provide an exhilarating moment-to-moment action.

Each of the different levels offered variety in both enemy encounters and the structure of the levels themselves. Later levels offered a snowy fortress with rails connecting separate platforms and plenty of flat surfaces to wallride across. This made tricks and combos easier to continue, but the enemies were more spaced out. Learning to combo over to different enemy groups to keep the chain going was more of a challenge in the later levels.

The game also boasts a cell-shaded art style that hits you in its opening title card. Huge bold font whips across the screen as players acid drop into the arena for the first time. It’s instances like this in Rollerdrome that give the smaller moments weight for the player. Defeating the last enemy in the level causes a slow-motion animation and a bright flashing victory screen. It’s a powerful exclamation point on an intense round.

In between major levels in the game, you’ll walk around small areas to get more of the worldbuilding in Rollerdrome. The quieter moments in the game showcases the people’s broken state and the private military corporations running the show.

While I didn’t see much of this in the preview, it proves that Rollerdrome has more to say than simply being a momentum-based combat shooter. I’m interested to see more of the game when it releases in August.