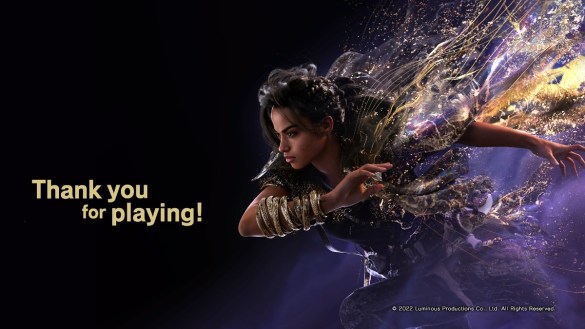 After a few hours into the Forspoken demo, I was really starting to feel things come together. The rules were initially unclear, and even Frey’s basic movements were difficult to handle. But soon enough I was dashing across the landscape, scaling walls, leaping across fields and dealing out spells like a deck of cards. But just as everything started to click I hit the end, the dreaded “Thank You For Playing” screen that knows you were just getting to the good part. But my biggest question following the demo is, just how long does it really take to get here?

Forspoken’s controls, represented as a marked-up controller diagram in its menu, are intimidating as hell. The whole controller is in use and then some, and even the HUD takes time to read and understand. There are many moving pieces, and you’re seemingly only scratching the surface in this demo. But even with all the pieces in front of you, putting the whole puzzle together is a task.

There are three major components to Forspoken’s action. Switching, cooldowns and navigation. In this demo you have two styles, each with a collection of individual spells. The spells are split among “left” and “right” selections, the right side representing your “primary” attacks and the left side being your larger, individual moves that help you assert control over an encounter.

While the primary spells let you more or less mash buttons, the secondary spells all seem to be at the mercy of significant cooldowns. There’s an excellent chasing move that can help Frey stay on a target for example, but you can’t just toss it out every time you blow an enemy away. You have to manage cooldowns, observe weaknesses, swap forms and functions to suit the moment and, of course, be able to see and understand your physical location in relation to enemies.

It’s so much to keep track of! That’s on top of the “parkour” mechanic, which is basically how Frey traverses the environment and evades damage, all in one. You can do some seriously cool follow-up attacks after vaulting over an enemy for example, but Frey’s leaps are so fast and cover so much ground that understanding when, what and where you can use that stuff in fights is an ordeal.

Forspoken’s combat was described to me as clunky at one point, and I’m not sure I agree. And yet I understand entirely. This contradiction manifests because, despite how responsive and fluid the literal controls are, managing Frey’s toolset is like trying to mug Felix the Cat and snag his wallet. Fishing around in such a cluttered space, while your brain is still deciphering what everything is, brings the clunky from the outside. In my time with the demo, that clunkiness began fading away as I spent time zeroing in and studying the game’s complex mechanisms. That’s where the problem I’m seeing comes in. It’s a matter of time, really.

Related: How Forspoken Draws From Alice in Wonderland and Final Fantasy XV | Preview

While the public-facing demo just dumps you out into the world, recent press preview sessions were more structured and took players through Forspoken’s actual chapters. And from what I’ve been told, many of the abilities in the demo aren’t around within roughly the first five or six chapters? Now, I don’t know how accurate that is or what constitutes “chapters” in this game. But given the rough idea the second spell style doesn’t come in until multiple hours has me unsure where Forspoken will find its audience.

I think I can see myself definitely getting a lot of mileage out of Forspoken. But I’m the kind of sicko who will sit there and dissect systems like this until I “get” them, as long as I get a hint of Something More early on. But it sounds like the final game starts pretty slow, taking its time to introduce those tools. But I have to wonder if traditional action RPG onboarding is what this stuff needs.

Perhaps the biggest challenge Forspoken will have at launch is how much time players feel like they’re being asked to invest. Just to get the basics down from clunky to comfortable. But hey, I’m on board, so why not stick around and see what happens?