How to Get Dondozo in Pokemon Scarlet & Violet - Prima Games
Tips

How to Get Dondozo in Pokemon Scarlet & Violet 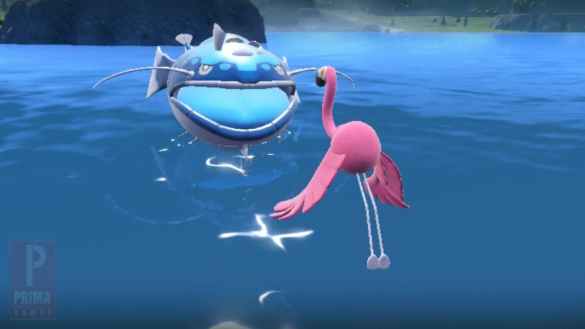 The Paldea Region might be based on Spain, but leave it to The Pokemon Company to make a Pokemon that’s a Japanese pun. Dondozo is a bit of a joke, both in terms of its name and perhaps its entire existence.

Not to cyberbully a giant fish, but Dondozo’s name is an amalgamation of the rice and fish dish Donburi and the Japanese word “douzo”, which means “go ahead”, usually stated by a chef after serving you your sushi. For Arceus’ sake, Dondozo even has a hachimaki on its head.

Dondozo’s entire concept is that it’s a giant, gluttonous fish who’s terrible at finding food for itself. So, the incredibly sushi-like Tatsugiri helps it out by climbing into its mouth and helping it catch prey. Imagine having a giant mouth and still being so inept at catching food you need a tiny little dragon shrimp to help you. Still, there’s a bit of charm to this strange duo, so it’d make sense if you wanted to add this giant catfish to your team. Here’s how to get Dondozo in Pokemon Scarlet and Violet.

How to Get Dondozo in Pokemon Scarlet & Violet

Unfortunately, getting the latest big-mouth fish Pokemon is a little harder than you might expect. Dondozo is a single-stage Pokemon, and like many single-stage Pokemon, it’s a rare spawn. You can find it in both Scarlet and Violet, during any time zone, but so far we’ve only seen it in Casseroya Lake. It’s possible you might find it in other similar, watery biomes, though nothing is confirmed yet. Dondozo also spawns with very high levels, usually 40 and above.

Related: How to Get Paldean Wooper in Pokemon Scarlet & Violet

If you’re deadset on hunting a Dondozo down, perhaps also go for its shiny version, as it turns this dark catfish into a pure alabaster white with goldenrod accents, making for a pretty fish indeed.

Good luck on your hunt, trainer!

Prima Games is your source for all Pokemon Scarlet and Violet-related catching and evolution guides, mechanics, and questions. Check out our other great articles here.