Are Kamisato Ayato's Constellations Worth Getting in Genshin Impact? - Answered - Prima Games
Tips

Are Kamisato Ayato’s Constellations Worth Getting in Genshin Impact? – Answered 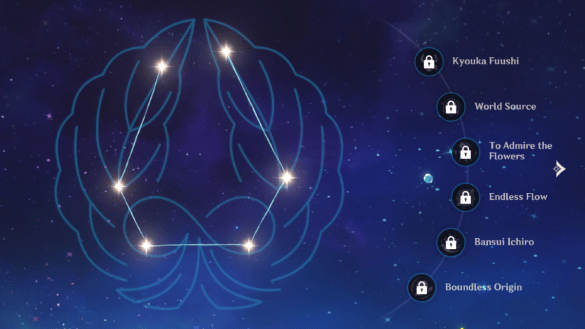 Units in Genshin Impact normally get stronger with each constellation they get, but five-stars are some pretty expensive ones to get. Unlike four-stars, you do gotta keep wishing until you get one, and they aren’t guaranteed every 10-pull. With Kamisato Ayato out, do his equal that of his sister?

Ayato’s first constellation boosts the multiple attacks he unleashes during his Elemental Skill. Known as the Shunsuiken when he slashes out with multiple Hydro sword strikes, Damage is increased by 40 percent against enemies that have less than half of their HP.

This constellation works nicely to improve Ayato’s damage against his opponents, and if built correctly, wiping out enemies would become a cinch. Coupled with the Black Sword from the Battle Pass, this skill would be incredibly powerful since the Black Sword will give Attack Percentage boosts each time Ayato defeats an enemy. If you were to pair brother and sister together, Ayaka could freeze the enemies, and Ayato could wipe them out in place the remaining that withstood her attacks.

Related: How to Get End of the Line in Genshin Impact

Although HP is not all that important for Ayato’s kit, it is an added bonus to his damage because it’ll increase the damage gap between each stack. So each stack will gain additional damage with his Max HP increase that is buffed all the more thanks to his second constellation.

What would happen if we added Jean to this team once Ayato’s fourth constellation is unlocked? Similar to Jean’s C2, Ayato’s Elemental Burst will boost his party member’s Normal Attack Speed by 15 percent for 15 seconds. Imagine adding Suiyuu in addition to Jean’s Elemental Burst, which increases Attack Speed by 15 percent, along with Yunjin boosting Attack for all of her party members. Not only would it be incredibly powerful, but almost laughable to see just how the game would break with how fast Ayato’s dabbing sword skills would be tearing down his enemies.

C3 and C5 To Admire the Flowers and Bansui Ichiro

The third and fifth of every character’s constellation is saved for increasing the Talent Branch from a max of 12 to 15. This can greatly boost a character’s damage since it’ll extend the already existing levels by three. So whether you have Ayato’s Elemental Skill leveled at one or 10, it’ll increase and boost that to Level 4 or 13, respectively.

These can make or break a Constellation streak because some character’s Bursts and Skills are worth more than their counterparts and if the earlier constellation is only a stat-boosting Skill or Burst, then it makes the later Constellation all that much more expensive in terms of gaining.

For Ayato, naturally, his most important Talent Branch will be his Skill, where the most damage is achieved. It makes getting his first few constellations worth getting, whether you plan on continuously wishing on his banner or wishing on every other rerun that he sees from now on.

His C5 will increase his Elemental Burst from 12 to 15 and is indeed valuable, but more so as a boost to gain more stats bonuses for his more aggressive attacks.

Truly boundless. Unless that was accidentally a typo that someone at HoYoverse really needs to fix. Not only will Kamisato Ayato’s attacks during his Kyouka Elemental Skill create two additional strikes, but when they do hit enemies then they will do 450 percent of Ayato’s Attack as damage. These strikes do not add to the Namisen effect so no matter what stack Ayato is on, he will only continue to do 450 percent of his attack when dealing these two extra attacks. But that in and of itself is incredible damage.

They really should have named it Boundless Peace because after Ayato takes to these enemies, there are going to be none left in all of Teyvat. Hard to imagine there was a war going on when this unit was just lollygagging about on the field.

Abnormally overpowered and outmatched by any of the constellations by far, what do you think? Will you wish for any more of Ayato’s additional buffs?