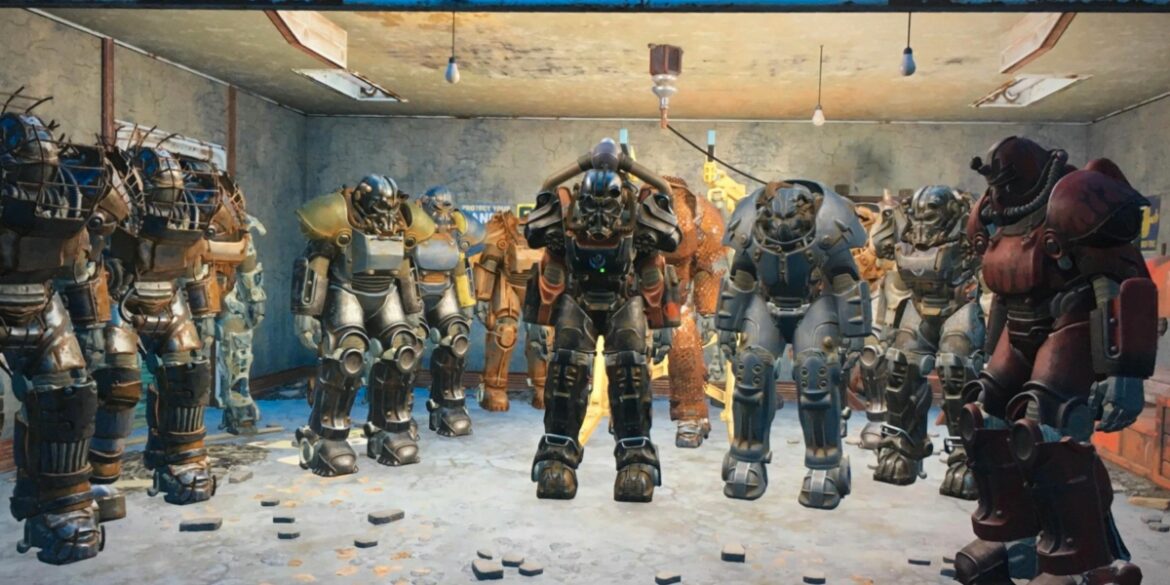 Fallout 4 is full of powerful weapon and armor sets, which has made it one of the most highly beloved RPG games of the previous generation. There are five Power Armor suits – Power Raider, X-01, T-45, T-51, and T-60 – but these sets rarely come full, and their pieces are scattered across the Commonwealth’s wasteland. Here are all of their locations.

All Power Armor Locations in Fallout 4

Luckily for you, we have completed a full list of locations for Power Armor suits and pieces:

Here you will find X-01 at various levels. Go to the back of the Custom House Tower, where you will face a few raiders. Use an elevator on the left after you find the golden ’35 COURT’ sign. You’ll come across two robots guarding buttons that activate the doors behind which you will find the armor. At level 28, you will find the X-01 set, then at level 32, you will get MK II, and at level 47 and above, the MK III.

This is one of two locations in the game where you will find an empty power armor frame. It is Zeke’s frame, and he can be forced out of it by destroying or pickpocketing the fusion core.

You will find an almost complete set of X-01 MK VI at the Gunners Base. The second frame is on one of the Gunners, is a non-owned frame, and doesn’t respawn.

Southwest of the lighthouse, you will find an empty power armor frame next to a power armor stand.

Here, you will find a corpse of an unnamed raider and, by him, the complete set of Raider Power Armor.

Just southeast of the Harbor Grand Hotel, beyond the playable area, the full T-45 Power Armor with the fusion core awaits you.

This location holds full T-51 Power Armor with the core. It is hanging over the edge at the top of the double-layered overpass highway between College Square, Gragarden, and the Corvega assembly plant.

Next to a crashed Vertibird at the northern end of the lake near Covenant, you will find two Power Armor sets, though not complete. On the right-hand side of the aircraft is a partial set of T-45, while if you are a level 31, you will be able to obtain a partial T-51 set.

A partial set of T-45 with a core is found south of the diner and west of the Corvega assembly plant.

The full X-01 set awaits you west of Dry Rock Gulch, but a pack of leveled ghouls guards it.

You will be rewarded with a partial T-60 outside the green container in front of the stockpile. One of the resident raiders may enter the armor if alerted. Allowing the raider to use the armor will let the player character kill and loot the armor pieces and then have the Power Armor frame. New parts respawn later, making this one of the few places to get respawning Power Armor other than the raider version.

A Partial X-01 is found here, under the abandoned shack in the Glowing Sea.

A partial set of T-60 with a core can be found in a locked trailer east of Fort Hagen.

Full X-01 Power Armor can be found between two Expert locked gates, between the tank room and shelved radioactive barrels.

A Partial X-01 armor with a core is found inside a small building behind a locked door near the end of the bridge to the fort.

To the northwest of Jamaica Plain and southeast of Relay tower OSC-527, in a military checkpoint on the road guarded by a Mister Gusty, you will find partial X-01.

Related: This Fallout 4 Mod Turns the Wasteland Into An Anime

You will find partial X-01 Power Armor just off the road at the southwest shore, at a military checkpoint directly south of the Natick Police Department and Natick Banks. It’s at the edge of the radioactive zone, unguarded, in the open. There are numerous deathclaws in the vicinity.

East of Mass Gravel & Sand, there is a Partial T-51 armor with the core inside a cage. You will need extra pick-locking skills as it is locked by an Advanced-level terminal.

A partial T-60 with the core can be found on top of the interchange. A yellow elevator below will take the player character to a gunner camp. The Power Armor is can be found at the station next to the turret. If a Gunner Commander enters combat and you kill it, there is a huge chance for Power Armor to respawn.

A partial set of X-01 is in the garage. You can enter the garage through a sewer pipe on the west, which you will find next to a large yellowish puddle.

A Partial set of X-01 at level 40 can be found west of the site in the southernmost swamp and west of the sunken barn. Most of it is submerged next to a crashed Vertibird, guarded by a Mr. Gutsy.

You will find a complete set of T-45 power armor but in mediocre condition, if you haven’t collected the suit already while on a quest due to having already arrived clad in power armor. Nevertheless, you will be able to get the suit later while traversing the museum again.

There are several power armor suits at this location; a complete set of T-51 at level 24, X-01 Mk II at level 35, and X-01 Mk III at level 50. However, to find it, you will have to jump onto several pallets and shipping containers, then walk on the edge of the barge. You will face bots and Assaultrons.

There is a full set of X-01 Mk I at level 28, X-01 Mk II at level 35, and X-01 Mk III at level 39 in the northwest outskirts of the training yard in a shipping crate, which is locked behind a gate for which you need expert lock-picking skills.

There is a full T-51 power armor suit with the green Vim! paint scheme inside a crashed Vim! semi, north of the Visitor’s center on the highway.

The Nuka T-51 power armor paint job awaits you in the cage on the ride portion. However, the door to this area needs to be unlocked from a terminal in the Quantum bottling area.

The Nuka World Power Plant holds the full X-01 set at level 28, Mk II at level 32, and Mk III at level 47. You can find these power armor suits in the basement behind an Advanced terminal-locked door.

The full set of T-51 power armor can be scavenged from a partially sunken barge. It can be found north of the church and northeast of Pickman Gallery. You will easily find it from a Vertibird and several APC-like vehicles at the location.

A partial set of X-01 power armor at level 31 can be taken from a crashed plane northeast of the turbine and directly south of West Everett Estates.

There are two power suits here. The first is a full set of BOS-II T-60 power armor, but you will only get it if the Sole Survivor has aligned with the Brotherhood of Steel and promoted to Knight. The second piece of the T-60 set is received upon the completion of Blind Betrayal. The second set is the one from the Paladin Danse.

There is a partial set of leveled X-01 without the core that can be found inside a track of a military convoy guarded by Mr. Gusty. This convoy is west of Finch farm and northwest of the array.

There are two shacks north and northwest of the Safari Adventure entrance. One of the shacks holds an X-01 power armor with leveled parts up to Mk VI.

A partial T-51 without the core is found northeast of Sanctuary Hills. It is between USAF Satellite Station Olivia and the robotics disposal ground. You will there a crashed Vertibird which stores a power armor suit.

There is a full set of X-01 behind an Expert-level terminal.

To obtain Quantum X-01 Mk V power armor, all 35 star cores need to be installed. It is located at the atrium display.

Partial T-51 power armor with the core can be obtained from a cage locked by an Advanced-locked terminal on train tracks east under the cliff and behind a blue cargo container.

You will find the full set of T-51 with the red Vim! paint on the top floor of the factory in a small office.