The cat is cute! Who knew? 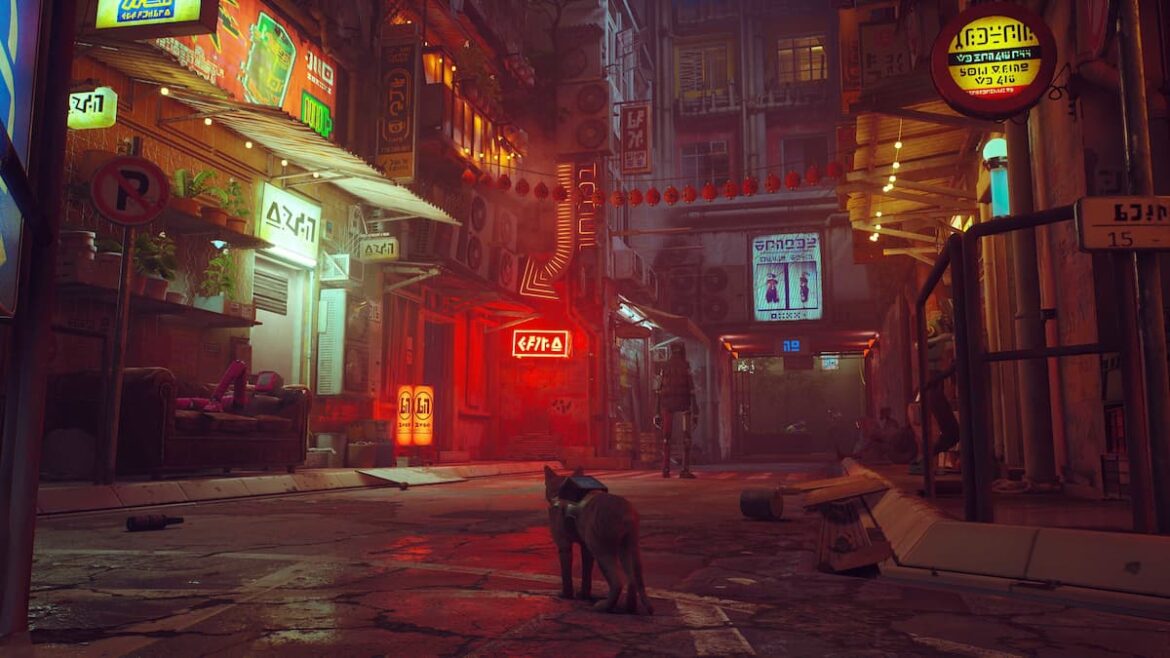 I will be the first to admit I am not a cat person and never had been. That was until I played Stray. Growing up, I was allergic to cats, and all of my memories involve watery eyes and feeling like actual death. So when a Stray code slid into my inbox, I was curious to spend some actual time with these furry little quadrupeds.

It turns out cats are really cute. Who would have thought? Stray puts you in the adorable little shoes of a stray cat who winds up in a civilization of robots. You’ll embark on a quest to reach the outside again and reunite with your feline friends above.

This will involve solving some interesting and not-so-interesting puzzles, knocking stuff off of shelves, and tearing up every carpet and couch you see along the way.

While I was enamored at the developer’s ability to emulate a cat’s behavior (including the look a cat gets in its eye before making a death-defying leap from one piece of furniture to the other), it was the world around it that honestly had me captivated.

The densely packed city streets, a low hum of neon signs, and depressed robots roaming around all add to the inherent sadness of this fallen world.

In Stray, you don’t see a single human; they are totally gone. We won’t get into story spoilers because you should experience it for yourself. These robots carry out human tasks like running laundromats, painting buildings, and even getting intoxicated at the local watering hole.

The game never shies away from just how bad their lives are and how so many of them have given up on ever living a better life. That is, until you, this stray cat, show up and give them a sense of hope. You can get into the dangerous areas and prove that there is a life worth living on the outside.

The puzzles in Stray revolve around sneaking into an area, either causing some sort of trouble or stealing an item, and then finding the NPC who needs that item. It’s a lot of obtaining one thing to trade it along to eventually get the thing you need. It’s a neat little way to show off the environments the team has built. Making it worthwhile to explore every nook and cranny Stray has to offer.

I was enamored by the different locations, from the ravaged Slums to Midtown’s brightly lit neon streets. Even a tree-like village gives Pascal from Nier Automata a run for its money. Seriously, Antvillage has you revolving around a giant sewer pipe, and Pascal’s village was the only thing I could think about. It’s easily the best location in the game, featuring plenty of chaos to cause and even more robots to tell you some pretty gnarly stuff.

The robots you meet are all over the map in terms of emotions. Some are existential in a way that fits the universe and world-building, while others are so hopeful for a better life. You’ll try and help families reunite, showing that there is something worth saving in this godforsaken world. That’s where the heart of this game lies.

While I loved Stray’s world, story, and minute-to-minute gameplay, I didn’t feel the gameplay ever evolved in a meaningful or engaging way outside of its first hour. This isn’t to say playing as a cat isn’t a great time, but I do wish there was a little more variety by the time you reach the credits.

Most sections involve a lot of platforming and ensuring you’re looking up just as much as you’re looking down. Some leaps I could make as the cat felt larger or longer than jumps I was previously able to make; this made some areas feel frustrating when I couldn’t jump to a spot I knew I could actually make.

You’ll journey with your little robot drone companion, B-12, who will help you speak to the locals, give you story and lore tidbits, and be a generally good companion to have along the journey. B-12 goes on their own adventure alongside the cat, but that’s for you to discover yourself.

One of the biggest highlights outside of the world of Stray is the ability to take cat naps in various locations. The game’s screen will pull back and let you soak in the scene. It’s a beautiful way just to enjoy the quiet moments our pets all too often have the pleasure of enjoying. There are several spots you can do this throughout the game, and it’s made for some really great computer wallpapers for me.

The game uses the DualSense adaptive triggers on the PlayStation 5 a little bit. You’ll feel resistance to the triggers when scratching a door or other surface. It’s a nice touch but not something that overstays its welcome.

Cats are nimble, acrobatic, and even headstrong creatures at times. Stray takes those concepts and runs with them. Over five to six hours, you’ll enjoy plenty of heartaches, cute cat photos, and a new world to fall in love with.

A copy of this game was provided by the publisher