Yeah, it's a new Splatoon 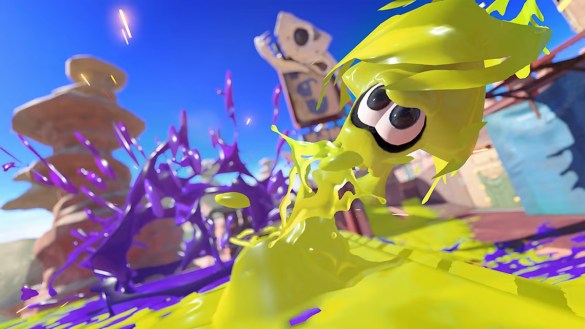 Nintendo quietly disrupted multiplayer shooters with Splatoon, a new IP on the doomed Wii U that made a big enough… splash to survive with a sequel instead of a Deluxe Switch port. Splatoon 2 was the real hit, and now Splatoon 3 is here as an institution. This isn’t just a cute alternative to Call of Duty, it’s a legitimate competitor in the space. Even despite the structural weirdness from Nintendo, Splatoon 3 will easily fill the time it needs until the next game rolls around. But the runway is getting a little saturated with more than just ink.

I started Splatoon 3 and it felt like I may as well have just booted up Splatoon 2 for the first time after a long break. This is a strength and a weakness, pointing both to how Splatoon has settled into its own identity as a series and as a big multiplayer shooter, and to how little this game has changed despite the new number slapped on the title. As I made my character, ran through the lobby, played some games, and started building an armory, I didn’t notice many major differences from the last time I did all this.

That isn’t to say there isn’t new stuff. There’s a whole new campaign mode that has things like lore in addition to substantial content and, well, campaign-like structure the series needed. There’s a goofy locker customization gimmick that is weirdly fun to screw around with. And there’s a new… lobby lobby? Once you start searching for a game or waiting for your friends to line up, you can run around and practice on targets. Or just see how long it takes to paint the whole area. It’s neat even if it’s shallow.

Otherwise, even with the new weapons and whatnot, I feel like I’m playing the same game. There’s the mobile app with voice chat and special items to buy, there’s the level schedule, there’s the splatfests, the goofy drawings players share, everything feels the same. And again, that comes with good and bad vibes. I’d love to see more work done to alter the structure somehow, but at the same time, there’s such an airtight slickness to how Splatoon plays there’s only so much room for mucking around productively anyway.

Splatoon 3 succeeds exactly where the other two games have historically, and that’s in breaking down barriers without sacrificing what makes a shooting game appealing in the first place. There’s still sniping, shotguns, fiddling with stats, weird specialization opportunities, and weird game modes that are essentially King of the Hill variations with different proper nouns. But if you can’t hang in confrontations with other players, you can simply spray and pray the environment around you and still handily contribute to the outcome. Stats are deliberately obtuse so that you can goof around without worrying about optimization.

You’re still playing a competitive, skill-oriented shooter running at a breakneck pace. But at the end of the day, it’s a real team effort and it’s one that doesn’t care that much about your K/D/A numbers. Get in there and cover shit with ink and it won’t matter how many times you got splatted by the nerd on the other team with four dozen hours of sniper rifle practice. Everyone can contribute, play how they want, and make a difference.

Sometimes I don’t always feel great about the way Splatoon 3 is built. The way it’s totally governed by weird rotations (including weapons in the co-op horde mode Salmon Run gimmick) can be frustrating. Splatfests demanding showing up for a specific time and never repeating gives the game an awkward sense of artificial shelf life. And it would be great to have the “do what you want” vibe extend to equipment instead of random rolls that require tons of money to tinker.

Overall Splatoon 3 is the best version of Splatoon, but it still mostly feels like that: a new version of Splatoon. Calling it a sequel feels a little generous at times since I don’t think I could look at a screenshot and tell you what game in the series it is without identifying a specific weapon or something. I also wish the clam/football nonsense game mode made any sense whatsoever. But at the same time, I know I can just pop the game open whenever I feel like it, jump into a game and have a good time. Even if I need a bit to wipe the rust off, I know I can fall back and make sure to cover all the spots the sickos left open by the home base and help bring in the wins. And there’s no disgusting wartime propaganda blaring at me on loading screens.