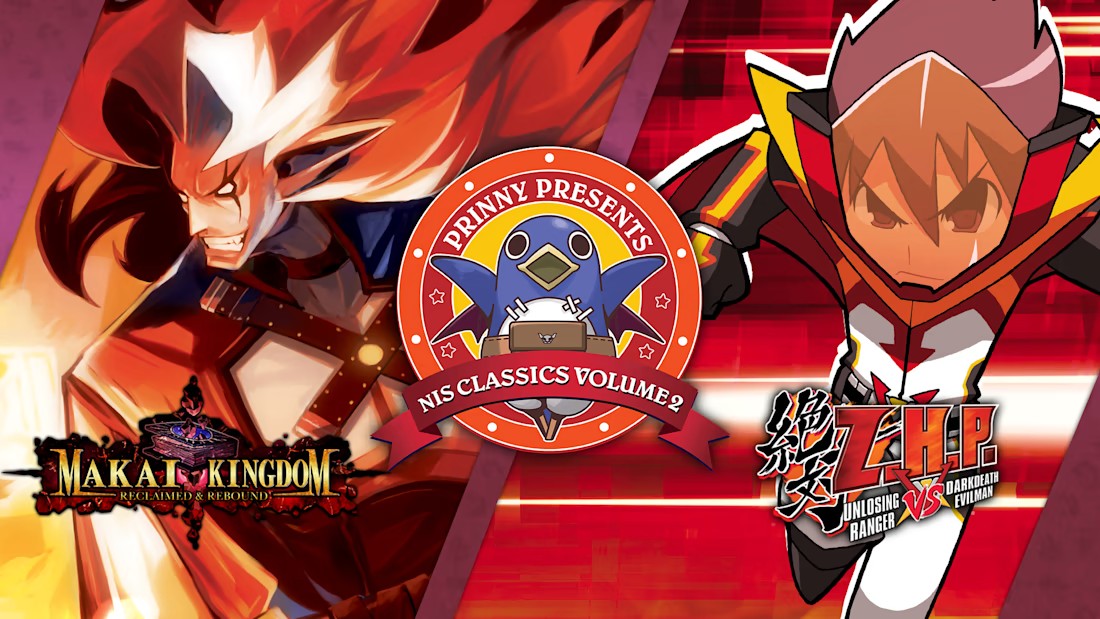 The first Prinny Presents collection was alright, featuring a couple of games that weren’t NIS’ best work, but were solid enough and stood out with unique systems compared to similar games. Volume 3 is looking to be more about the company’s origins as an upcoming JRPG machine. Volume 2? Well, this is where the real sicko stuff lives. These are the misfits of the misfits, games that may not come up in general NIS or Disgaea chatter, but the ones who know, they know.

This set is also interesting because of the way the Prinny Presents series in general seems to be built. Volume 1 was a PSP port for Phantom Brave, and Soul Nomad looked to me like a straight PS2 emulation (that game was never re-released). Here, we’re looking at another PSP port, but one that never came stateside. We’re also looking at, well, a second PSP port but this time for a game that started there in the first place. These games are Makai Kingdom: Reclaimed and Rebound and Z.H.P. Unlosing Ranger VS Darkdeath Evilman.

Makai Kingdom sits in a spot between the original Disgaea and its sequel. It’s a Disgaea spinoff that arrived as the series had picked up some steam, bringing players back to the Netherworld after Phantom Brave, and before Disgaea 2. A silly game even by NIS standards, you play as an overlord who has bound his soul to a book to escape a bad situation, and now must rebuild.

Z.H.P. is a total departure from the usual NIS style, instead looking more like a Mystery Dungeon from Chunsoft. This was the first one of these from NIS, which went on to make several more (most recently Void Terrarium). This game is absolutely wild, as if the creative team was just trying to come up with the most absurd scenario possible. Z.H.P. was a buried treasure on the PSP, and hopefully it’ll find some rejuvenated interest on the Switch and on Steam.

If you’ve played these games already, the real star of the show is Makai Kingdom. In the States, we only ever saw the original PlayStation 2 version, which itself didn’t stay on shelves very long. This is an updated PSP version that has several new features. So this half of the set is a brand new localization, in part. Z.H.P. is my favorite of the two games, but there isn’t really anything new happening here. It’s a great game, but if you’re looking for a “remaster,” that’s not what these collections are.

It’s great to see NIS reaching to its back catalog for modern platforms, especially since the PC versions ensure they’ll be available for a long time. Older NIS games are some of the most notoriously scarce titles of their era, making secondhand prices pretty ghastly. So while it’s always kind of a bummer when a game is re-released without any new pizazz, it’s still great these games have had their lifetimes boosted significantly.

The path these Prinny Presents collections are taking has been odd, but fun to watch play out. They’re really bouncing around in time, and the way games have been paired so far gives us a small look into how NIS might see its own library. If you’re jonesing for some super niche JRPG grinding time, we definitely recommend Volume 2 if you can only get one. Makai Kingdom is a goofy romp that’s different enough from Disgaea to stand out, and Z.H.P. is just utterly unhinged in the best ways. We already know what’s coming in Volume 3, but I really want to see if a Volume 4 or 5 could happen and what those would include.