My other weapon is some sick parkour. 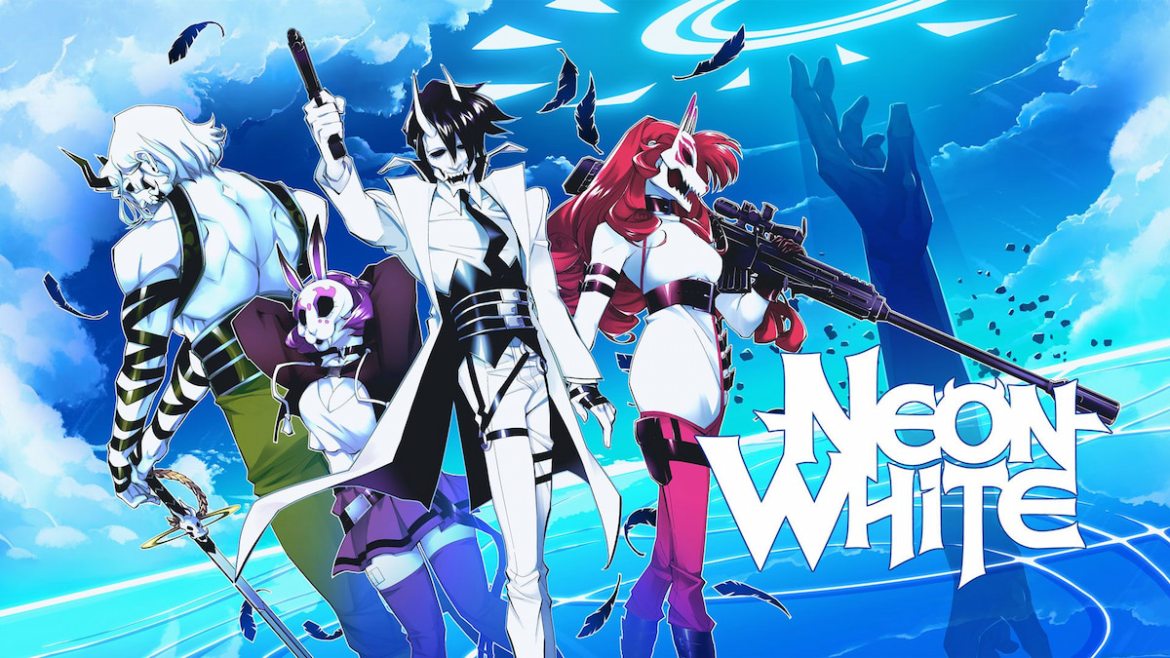 Neon White, the latest game by Donut County creator Ben Esposito and the first game developed by Angel Matrix Studios, is a fast-paced frenetic FPS that never lets off the gas.

Awoken from a slumber, the main protagonist Neon White finds himself in Heaven, with no memories of his past or how he ended up here. After some chance encounters with old friends, he, and all of the others in Heaven, are tossed into a competition to slay demons. The winner of this competition is promised a chance to permanently reside in Heaven, or so it seems.

Tasked with climbing the ladder and becoming the greatest demon assassin, the game throws you into its first set of levels, teaching you the basic flow of how each level works and how the systems string together.

For a game that is designed around speed, it wasn’t until I slowed down and took stock of all of my options in a level that I would get the coveted ace medal.

The main crux of each level revolves around the “Soul Card” system. Weapons in Neon White are presented as cards and have multiple uses. For instance, the first card you’ll find in the opening levels is the handgun, which can be used to destroy demons, or you can choose to burn the card for some added vertical movement.

These concepts gradually get more complex, from directional boosts to dashes, to an eventual zipline. The movement options in Neon White and how they flow into each other feel incredible.

Use your single-shot rifle to explode a barrel and launch yourself into the air, burn it to get a horizontal dash into a submachine gun card that allows you to swiftly ground-pound on enemies, you can start to see how these mechanics interweave.

It’s a dance between using your weapons to slay demons, watching your ammo count, and burning at key junctures to obtain additional movement options. Each card functions differently and it’s a puzzle to figure out when you need to burn the card for its unique movement property, or when you need to hold it for a later section.

These cards are placed around the map with purpose, each indicating a path forward if you know how to use it right. You don’t walk into a level with an arsenal of weaponry, you need to carefully plot out your route through the level for max efficiency.

Neon White is all about speed and completing levels with as little friction as possible. Learning the fastest way to traverse an area is key to getting your times as low as possible. Levels are ranked in four different medals, bronze, silver, gold, and ace. Each medal unlocks a new reason to go back and replay. Obtaining bronze will unlock a hidden gift in a level, which takes a whole new set of skills to figure out. Finding these hidden gifts on a level is one challenge, then you have to rethink the tools at your disposal and how to get them. It’s an incredibly clever way to recontextualize an already completed stage.

These gifts in turn can be given to the characters back in the hub world, unlocking new dialogue, some unique goodies to decorate your room with, sidequests with all-new stages, and eventually a memory of you and them in your past life.

As I progressed through each set of missions, I could feel myself getting better at split-second decision-making, which Neon White constantly makes you do. Each stage is specifically tailored to make you feel like the ultimate assassin when you pull off the optimal route. However, there is plenty of room for improvisation, especially in the later stages. I found myself barely scraping by some of these encounters, hanging on by a lucky grapple or jump.

Even though I knew I would need to replay the stage for a better time, it was exhilarating whether I did a solid run, or completed it by the skin of my teeth.

This is where Neon White truly shines through. It feels incredible to play and is designed to be a constantly upward ramp in both difficulty and execution. The basic tools and ideas it teaches you in its early stages come full circle when it has you running the gauntlet in its final sections of levels. Combining old and new ideas to test everything you’ve learned throughout the game.

Neon White pushes you to be a better player by teaching you and introducing new weapons and concepts slowly throughout its entirety.

When I sat down for a run, everything else faded away, and Neon White demanded my full attention, but never felt like it was disrespecting the time it asked for.

After you’ve got an ace medal, which is obtained by finishing a level under a certain time, you unlock the global leaderboards. Every time I assumed I had a really good time on a level, I saw folks with finish times multiple seconds lower. This made me constantly re-evaluate a level for a new shortcut or strategy I may have overlooked.

I am not one for leaderboard hunting, but Neon White makes it approachable, easy, and most importantly, fun. Sure, it can feel like a twitchy FPS game at times, but it’s far more akin to a puzzle game than anything else. You have to think of your weapons as tools, especially with their unique movement capabilities. Utilizing these in interesting and unexpected ways makes trying to get your times down more about creative problem-solving.

A huge part of why the movement and momentum swings in Neon White work is due to the intricately crafted levels. The level design carves a legible and cohesive path for players to follow, but allows for spontaneity and player creativity around every turn.

Every level has a clear shortcut that the game tells you about, but after plenty of experimentation, it’s clear that the gameplay systems can manipulate the levels in ways I haven’t even seen yet. I found a few new routes playing around with the toolset, but as the player base expands, I have no doubt even more ridiculous routes will be uncovered.

Outside of missions, you’ll return to the central hub area where you can chat with NPCs to get more of the story as it unfolds and listen to the stellar voice cast including Steve Blum, Alycia Packard, Courtney Lin, and more. The performances are solid, even if the story sometimes fails to always land its climactic moments or reveals.

The dialogue quickly swaps between serious tones and quirky one-liners, sometimes hitting, other times not so much. The game never shies away from sticking a joke wherever it can, and they land to varying degrees. That being said, Neon White is always emphasizing fun, even when it’s laying on some of its heavier concepts.

Neon White has a true ending, which adds a nice endpoint for the adventure, so even after hitting the credits, there’s still some more to see. It gave me some character moments I was looking for in the main story, and I’m glad I got them, even if it meant a little extra grinding to find all of the collectibles. I recommend doing it.

The aesthetic drips style around every corner. Soul Cards are bright and colorful against the white backgrounds and buildings making them stick out and easily readable from a distance. Each set of levels within a mission gets increasingly more visually complex all the way to the very end. Even the menus are clean without feeling boring. When you complete a mission, White jumps through a stained glass window and points at the camera with a big Mission Complete screen in black and white.

The same goes for the soundtrack which provides excellent background music that doesn’t feel like wallpaper when repeating levels. It consists of good beats and rhythm that help elevate the action. While no track specifically stands above the rest, none of them make replaying levels feel like a chore. I never got bored of hearing a level’s song, no matter how often I redid a level for a lower time. Every set of missions introduced a new banger, lo-fi beats to slay demons to.

Outside of leaderboards and hidden gifts, after completing the game you’ll unlock the Level Rush game mode, which allows you to play through all of the levels in one go with unique modifiers based on if you choose the Heaven or Hell game type. These modes, while challenging, are great speedrun categories, even with the option to shuffle the level order.

Neon White is an incredible package filled with some of the best speed-based levels I’ve played. Even if you’re not into speedrunning, Neon White offers the tools to learn at your own pace while setting the focus on the player. It pushed me to get better, but let me figure the rest out on my own.

A copy of the game was provided by the publisher for review.