A boy and his dog. And his tank. And his friends. And their tanks too 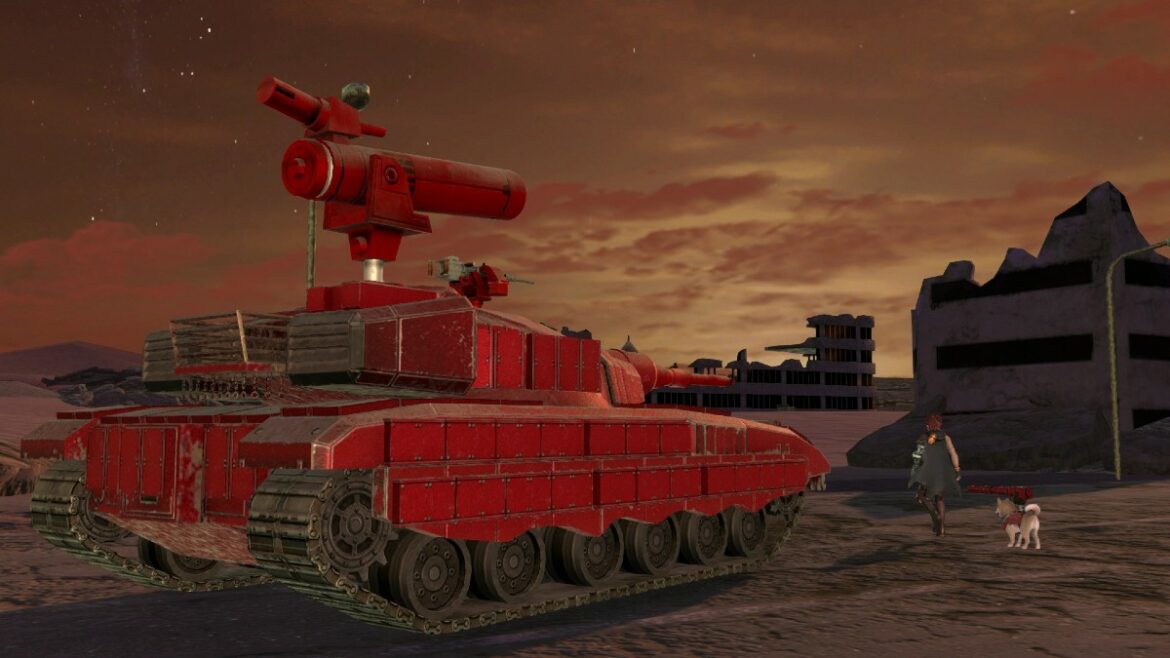 I don’t understand why this game exists. The more I played it, the more of a mystery it became. Which is weird, because you think it’d go the other way. It’s because Metal Max Xeno: Reborn is a remake for a game that probably could’ve used one. But in practice, Reborn feels like more of a… retry? Sidemake? Whatever you call it, it’s a massive departure from the original in a lot of ways. And while I certainly had a heck of a time diving into it, I’m still confused about its purpose. It’s cool, but why?

For whatever reason, Kadokawa decided that game needed a remake. Perhaps it was poorly received in Japan, which makes it all the more strange it was localized. Regardless, that’s how we ended up with Metal Max Xeno Reborn. It shares the basic premise with Xeno, but with a tone and style that’s way different. There are also significant gameplay changes, and other structural adjustments.

That said, Reborn is still a fascinating game, just for different reasons. It’s all about pushing forward in an unforgiving wasteland, scraping together resources and upgrading your growing battalion of tanks. And unleashing all those upgrades against giant animal robots. There are a kazillion options to customize your weapons, and plenty of overpowered boss fights to keep you grinding and tinkering. This is really where Reborn shines, as the combat has more of a pseudo real-time feel to it compared to the traditional JRPG battle scenes of the original. Sometimes that makes it feel clumsy, but when everything comes together it rules.

For every interesting or neat change, there’s a puzzling one. A Shiba Inu character, which was simply a mascot on a poster in the first game is now a full-on party member. It can’t operate a tank but it has its own bespoke skills and equipment, making it a sort of wildcard element in a fight. “Pee” is one of its skill trees, so even though it’s a lot less horny, Reborn still has that crass charm. Just a lot less of it. But there are still giant ants you can beat to death with your bare hands. Metal Max is a complicated individual.

Fighting outside your tank was a death wish in the original (save for specific scenarios) but much more of a utility here. You still get smushed, but utilizing buffs and other skills can afford you more options in combat than simply spamming missiles. It’s wild when a big boss fight has characters firing giant missiles, then hopping out of their tanks real quick to toss a smoke grenade or lay a trap, then scramble back in to fire more missiles. All the while hoping you don’t get vaporized out on the sand.

But the stat checks are all over the place, including bizarre points on the map you can’t pass until you have a weapon with enough power to break the obstacle. It makes progress really difficult to suss out, especially since the map isn’t very helpful. It’s very hard to tell where you’re going sometimes, and it’s super difficult to really gauge your strength or capability to win fights. There’s lots of bumbling in wide open areas full of sand and not much else.

Above all, the most puzzling aspect of Reborn is its vibe. Metal Max Xeno was bright and loud, with garish character portraits, bold colors in the world (despite it being a wasteland) and punk-inspired music. The main character had a totally wild design and screamed a lot. If that game was a person it’d be a chain-smoking delinquent covered in piercings wearing a silk Trigun button-up and shredding the hell out of an overdesigned guitar covered in anime porn stickers. The ghosts of that aesthetic are present, but with less unreal anime flavor and more… realism? The colors are almost all gone from the world, the cell shading is replaced with smooth textures and the music drops the heat in favor of moody guitar twanging.

As I played Metal Max Xeno Reborn, as someone familiar with the game it was… rebirthing, I often found myself wondering why this existed. It wasn’t really improving on anything in the usual remake sense. It’s more like lateral movement, trying something else but using the same set of building blocks. It’s an interesting project for sure, and probably more digestible for the less hardcore anime junkies while still retaining what makes it a blast to play.

But the game has so many of its own idiosyncrasies it’s tough to come down on whether or not Reborn is a “better” game or simply an oddity of an overcorrection. Considering the day this game came out in North America the sequel was canceled, I have a concern or two. Metal Max is a fascinating series with a long, mostly Japan-exclusive history, and I’d hate for this to be the make it or break it moment. The world needs more weird shit like Metal Max Xeno.

Metal Max Xeno Reborn is a totally fine game with awesome tank tinkering and a cool dog that straps a machine gun to its back and draws power from its bodily fluids. But if you’ve played the original Metal Max Xeno, you might be more confused than hyped. It’s more of the cool tank stuff, but a dramatic shift in style and tone that just makes the weird low budget JRPG feel like a weird low budget JRPG in a different way.

But it’s still kinda dope? I dunno, man. Every now and then something strange like this happens in videogames and I never know what to do with it. But having this experience, being able to sit down with something this confusingly unnecessary and think about it? While still having a good time playing with kickass anime tanks? I love that shit.