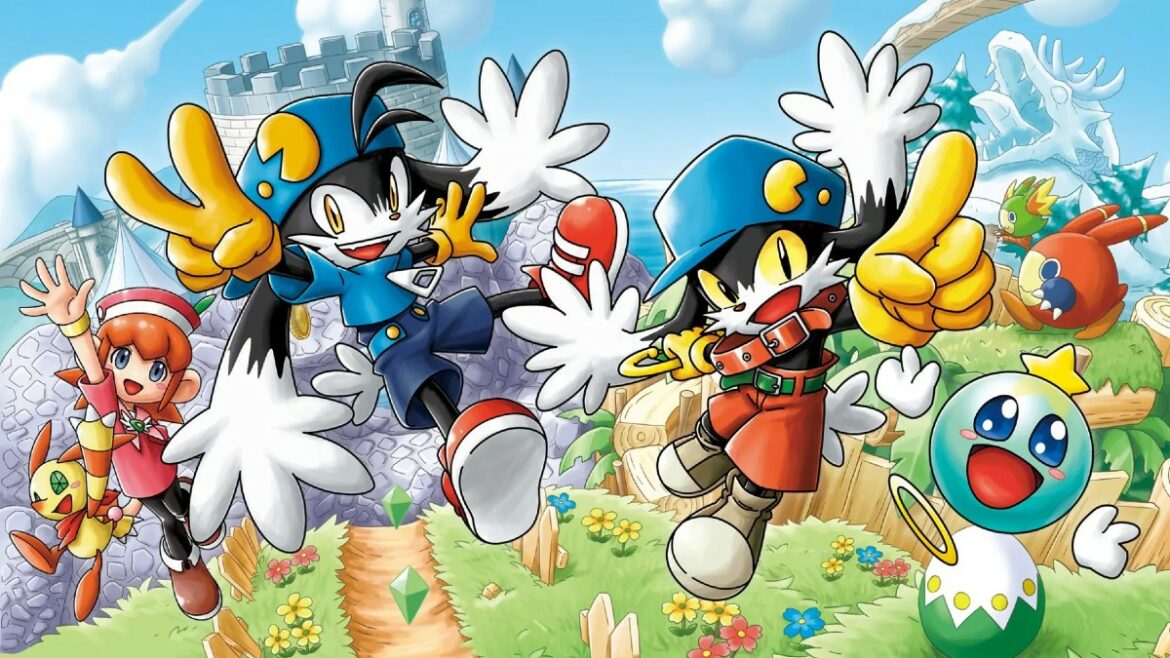 Klonoa not being more popular is a real tragedy in this space. This adorable little fuzzball was set up to possibly be the next torchbearer for Namco after Pac-Man, but things didn’t seem to work out. But from the PlayStation to the Game Boy Advance, every Klonoa puzzle/platformer was so full of charm and style it can make a person sick. Around 10 years since the last release, and a failed movie project and who knows what else, Klonoa is back in a videogame for his 25th anniversary. Unfortunately, this is a remaster set instead of a new game. Fortunately, this remaster set is a banger.

Klonoa Phantasy Reverie Series is a two-game remaster set comprising the very first game (Door to Phantomille) and Klonoa 2, the following numbered game (but the fourth game in total). These are fairly straightforward HD glow-ups, with a few interesting or strange little pieces. But while I’d normally be clamoring for more extras and historical documentation in a release like this, It’s just so great to see Klonoa again it’s hard to care!

What’s really interesting about this Klonoa duo is how different the two games feel, physically. It makes sense, as Door to Phantomile was The First One, and Klonoa 2 was an early PlayStation 2 game serving a specific niche for demo discs and whatnot, so that game already felt polished in 2001. The basics are more or less the same, but between the simpler and more punishing platforming in Phantomile and spectacle-driven camera swooshing of 2, these games are emblematic reps for their eras.

Part of what makes that difference so interesting is the first game’s port. This isn’t a spiffed up version of the PlayStation version, ala Legend of Mana or SaGa Frontier. It’s a revision of sorts for the 2008 Wii remake simply titled Klonoa, which arrived in the wrong place at the wrong time, and nearly ended this man’s whole career. But here we are, with a second chance! A second chance that doesn’t include a physical release in North America… tragic.

Anyway, Phantasy Reverie’s Door to Phantomile lines up pretty well with the Wii version if you watch the same chunks of normal gameplay. But besides the higher resolution the colors are a lot more bright, the UI is brand new, the dialogue is totally relocalized, and Klonoa is sporting a modern version of his original look instead of the makeover he got in 2008. The original PlayStation design was very different from where the character ended up, so it’s rad to see that come back.

Sometimes Phantomile feels a little too bright, with the colors popping off the screen regardless if you want them to or not. The Wii game was much darker, but had other visual gimmicks (like lots of bloom) to hide hardware limitations. This port is what those visuals look like with the limiters off, which is ultimately more faithful to the original.

The game itself is quick and breezy, until it occasionally decides our furry friend and his cool Pac-Man hat need to burn. Some of the timing requirements are super precise, with puzzle sections that really only have one right answer. And because there’s a lot of precision involved, it can be frustrating when you know what to do but just fumble the jump or “wind bullet” shot a little. Luckily there’s an easy mode that tones down the damage and provides infinite lives, so if Balue’s Tower is giving you grief, you can at least pull back on the stress from limited tries.

Klonoa 2: Lunatea’s Veil is seriously something special, a game I honestly can’t believe isn’t more well-known and beloved. But everyone I know who played it is right on board with me. So it’s great to not only have it come back for the first time in 20 damn years, the remaster is really good! Natively darker visuals compared to Phantomile do wonders for a game of its vintage, and the widescreen bump brings even more life to an already lively game.

Sometimes the camera struggles a little to keep up with motions designed for 4:3, but that’s the only performance hitch I hit the whole time. Beyond that there are similar elements in Lunatea to the first game, meaning a matching, new UI and the easy mode option. There’s also alternate costumes for Klonoa that are like, new DLC options? But they’re pretty insignificant.

Bandai Namco’s biggest crime with this release is the “Pixel Filter” option. I don’t know what in tarnation the goal was here but whatever it is, this ain’t it. Yes, the original Klonoa: Door to Phantomile was a 2D game (in that jittery PlayStation way), but this… is not that. Instead it’s like a weird photo mode filter slapped on top meant to, I assume, evoke that PS1 vibe. But look:

Also, this option exists for Lunatea’s Veil too??? For no reason??? Klonoa 2 originally looked like it does here; it’s a port of that same game, there were no pixels to speak of. Why even have it there? It’s like the goofy PSP emulator on the PS5 offering PS1 visual options. I could see a CRT-style filter being pretty cool or maybe a 4:3 mode for both games, but this sucks, man.

It’s a little unclear what the intent of this overall release is, especially since Klonoa Phantasy Reverie Series has just been kinda dropped on the stoop in North America. It’s like there’s no faith in it here from the jump. So it’s hard to see it as an attempt to draw new players in. And if it’s for the sickos who love Klonoa already, you’d think there’d be more than two games, or more celebratory bonus features or something. But it’s pretty straightforward and the few attempts at bonuses are not great.

And sure, could this have been an amazing collection if it included Klonoa’s WonderSwan and Game Boy Advance outings? Or perhaps a museum with design documents and other goodies, Sonic Origins style? Yeah, for real. But Klonoa isn’t on great terms with the United States Dollar, and there’s clearly effort here in the core, which is the two “main” Klonoa games.

These are excellent ports-slash-remasters, and if you track down a physical copy from Europe or Japan, that new box art is lovely. These are excellent games that deserved and still deserve better. But it’s great to have them and play them again without dragging out a PS2. I just hope the numbers look good enough at the end of the day for more.