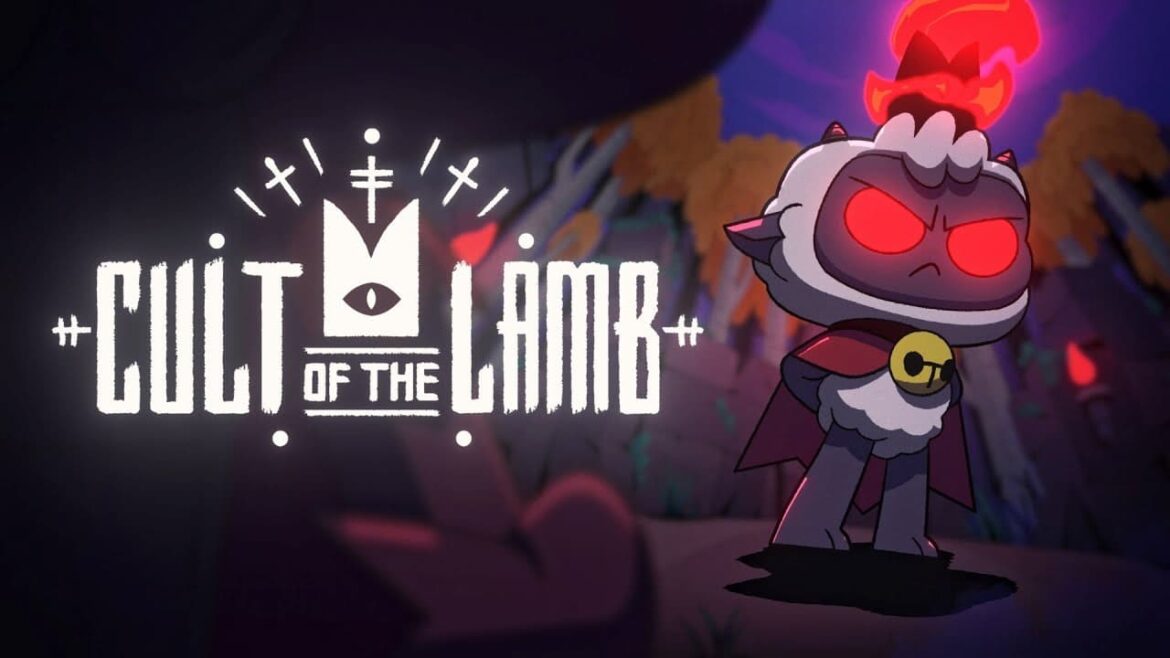 Cult of the Lamb from Massive Monster lets the player run their very own cult of cute animal creatures. It’s all about striking a balance between going out on combat expeditions and returning home to ensure your followers stay in line. As you progress through the game’s four different biomes, you’ll grow more powerful and gain new abilities to grow and expand your cult.

You’ll be able to recruit new members into your ever-growing cult by saving them from sacrifice, finding them stranded, or even buying them from a hungry-looking spider. All of your members are entirely customizable. You can change your follower’s form, color, and name.

You’ll need to provide shelter and food for all of the cult members to keep their faith high and hunger low. All of this is done via a small town building simulator filled with different buildings and decorations you can craft with the resources you gain from combat encounters.

Build medical bays, offering statues, and more to provide passive resource gains while you slay other false deities. Every time you recruit a new member into the cult (which you can name whatever you want), you will give them a job to chop wood, mine stone, or spend all day worshipping you as their true god. When followers worship you, you’ll gain divine energy to spend on upgrades for your town. This is how you unlock new and improved buildings in-game.

Combat in Cult of the Lamb pits players against randomly generated sets of rooms that have enemy encounters, safe spaces, and areas where you can pick up perks in the form of tarot cards. A random weapon and spell (called curses) will be assigned at the beginning of each run. These can range from tiny vampiric daggers to giant crushing warhammers. Each feels different, with varying attack speeds and damage outputs. Chests for defeating encounters can offer new and more powerful weapons, but it’s all randomized.

Combat feels okay in Cult of the Lamb. It never felt like it escalates, and you can mostly get by with the same strategy at level one that you do at the end. Once you find a combination of weapons and spells that works for you becomes routine pretty quickly. I never felt the game challenge me to change up my playstyle.

However, it does have an excellent dodge roll that can be further augmented with perks that give you fun extras. For instance, in one run, I was able to drop a bomb every time I rolled. This turned my defensive maneuver into an offensive strategy.

Back in your town, you can give sermons and rituals at your temple to increase the power of these weapon drops, constantly unlocking new variants and levels for your arsenal.

Rituals are unlocked as you complete side quests. Not only do they feature some of the most insane animations Cult of the Lamb has, but they are super helpful for keeping your cult happy, even if it means brainwashing them with some mushrooms.

My biggest problem that persists in Cult of the Lamb is that the combat sections and town building never feel like they come together in a cohesive or meaningful way. It feels like two different ideas that don’t mesh.

I’ll go do one run and come back to my cult with a slew of problems, from sick members to collapsed shelters. It never felt like I was able to let my village live on its own without having to constantly micro-managing it, making going out to fight something I would put on the back burner. To progress through the game, you must complete the four different biomes and slay the gods, so why did it feel at odds with itself?

Coming back to my cult meant hitting a few buttons to gain the required powerups. I could give gifts to each member to increase their loyalty and provide me with more divine energy for leveling, but I never got attached to any of my followers. Followers can die for several reasons, most of them being old age. So it was hard to connect to any member after a handful of combat encounters; I would return to them being dead. I’d bury them and then forget they ever existed. It’s a good commentary on cults, but as a game mechanic doesn’t do much for me.

The constant back and forth made it hard for either half of these sections to shine.

You can travel to new areas of the map to complete side quests for NPCs around the map. These locales range from a beachy shoreline with fishing opportunities to a gold city called Mida’s Cave. Completing different gathering quests for these characters will net you Holy Talisman fragments to further increase your equipment. It’s a nice break from the other game sections and offers up some more exciting area designs in Cult of the Lamb.

While Cult of the Lamb doesn’t always feel cohesive, it’s an enjoyable 10-hour ride. Give it a shot if you’re looking for a game with a striking art style and unique mechanics. Your followers are waiting to be indoctrinated.