'Tis no longer the season for giving. 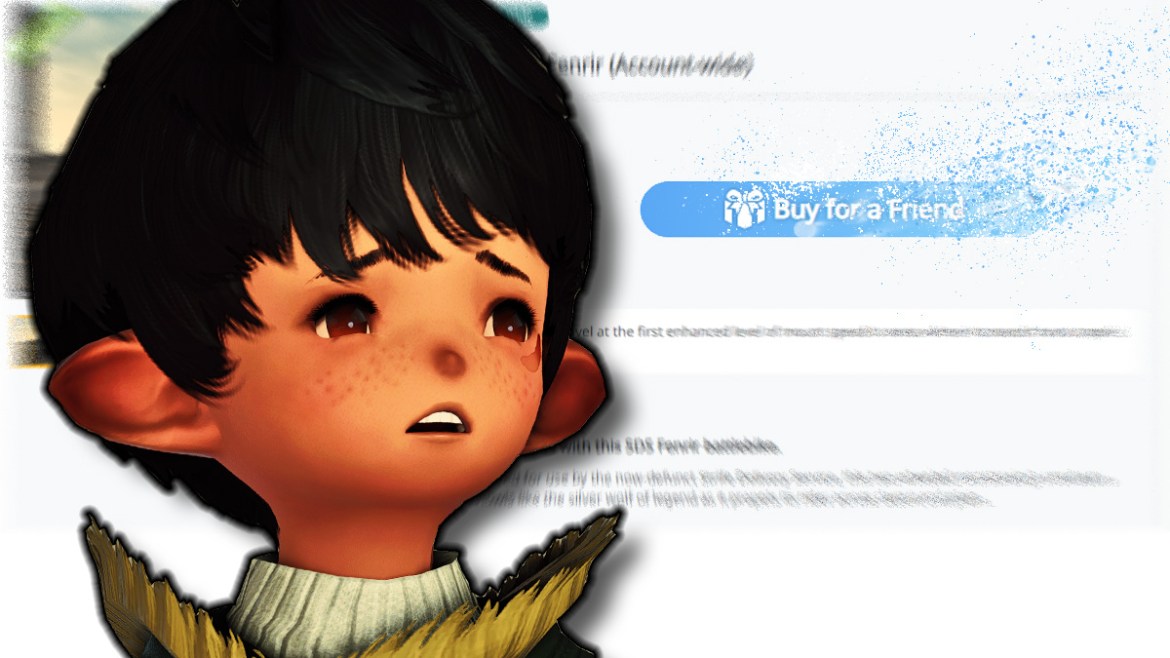 In a recent change that made a total of zero players happy, Square Enix has gutted one of the most beloved features of its Final Fantasy XIV Online Store. Detailed in an October 25 blog post, the FFXIV team explains that changing the way gifting items work, and completely removing the option for most items, serves as a preventative measure against real money trading (RMT), fraudulent purchases, and accidental duplicate gifts. Time and time again, real money traders and scammers remind us why we can’t have nice things, and now we’re all being punished because of it. I think that sucks – here’s why.

Related: FFXIV: How to Get the Mechanical Lotus Mount in Final Fantasy XIV

See how I cleverly threw in a link above to an online store mount that just released? Guess what? You can no longer purchase that, or any other mount, as a gift for your in-game friends, lovers, ex-lovers, ex-lovers’ friends, etc. Haha, good one, eh?! In fact, you can no longer gift any one-time-use items to your friends. This includes mounts, minions, emotes, chocobo bardings, and orchestrion rolls. The only exceptions I’ve seen are Fantasia potions, meant for altering your character’s appearance, and, strangely enough, Story and Character skips.

This has the community in a less-than-stellar mood, especially with the holiday season approaching. Users on the FFXIV Subreddit share their frustrations as they exchange stories of how they used the gifting feature to surprise their spouses with a new mount, or their in-game sprout friends with some minions and emotes to start their journey. An easy birthday gift, a celebratory gift for newlyweds, or a simple surprise for no particular reason – nope, can’t do that anymore, because that could possibly be a fraudulent purchase, says Square Enix. Or, even worse, the recipient might already own the gift, and Square would have to go through the trouble of…

Just kidding, I’m being sarcastic. I know, it was really subtle and you probably couldn’t tell, but Steam actually has done those things for many years now, and I fail to see why the FFXIV Online Store couldn’t do the same, rather than stripping a feature that upstanding, law-abiding Warriors of Light have enjoyed for years.

Related: How to Unlock The Manderville Relic Weapons in FFXIV

Previously, when you’d purchase an item as a gift, the online store would provide the purchaser with a gift code that they’d share with the intended recipient. The recipient would then enter the code into their own Mog Station account to redeem the gift. Unfortunately, this led to real money traders buying codes for resale purposes, and scammers buying codes through their victim’s accounts and also reselling them.

Now, purchasing what little remaining options we have left as gifts will instead use the buyer’s friends list and directly mail the gift to the selected recipient in-game. No code entering required. So, why couldn’t this same method be used for one-time-use items, like mounts and minions? Take it away, FFXIV team:

“Items that can only be used once per character have been excluded from the gifting feature to avoid the possibility of the recipient having already used the item before.“

This change doesn’t only hurt the normal, everyday gift-giver looking to make someone smile but, in fact, it hurts the entire community at large. In-game giveaways provide incentives for player-created community events, contests, parties, and celebrations on every server. Final Fantasy XIV streamers often give back to their communities by gifting mounts and minions, while Free Companies (guilds for you… other MMO players) host seasonal and anniversary events for all players to participate in (shout out to Umbra and Leaf on Excalibur). It’s one of the many aspects that help make this game so special and community-driven, and it’s being taken away from us because of some dorks who can’t play by the rules. That sucks, and that should change.

It’s hard to say whether this move will benefit Square Enix, or if it’s a silly oversight they fumbled over without much thought. Hopefully Square can find a balance between curbing RMT activity and giving the players more options. I have to imagine it’s not worth all the potential gift purchases they’ll now be missing out on, but what do I know, I’m just a guy who continues to pay a subscription fee to retain a digital piece of real estate. Oh, they turned off auto-demolish months ago? Eh, whatever, keep taking my money.

For more information on Final Fantasy XIV, check out our other guides and tips here at Prima Games.