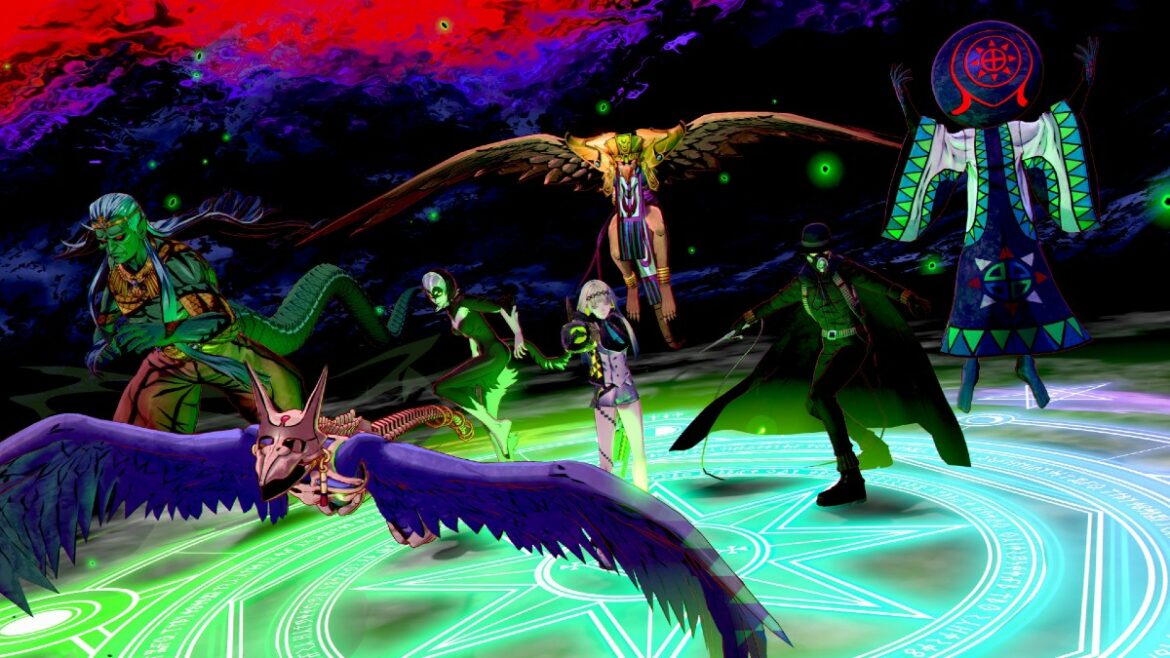 What does “Soul Hackers” mean to you, readers? Is it totally unfamiliar, or did you play the one on 3DS? Or are you like me and have encyclopedic knowledge of ATLUS’ Devil Summoner series? Whichever answer you pick, I’m pretty sure Soul Hackers 2 is meant for you. In some way or another. I’m not totally sure yet, though. I’m a little confused. But also having a good time?

It seems like, once again, ATLUS is experimenting with its MegaTen universe branding. Soul Hackers originally was a sequel itself, to a game called Devil Summoner back when it dropped for the Sega Saturn. And that first game’s full title was Shin Megami Tensei: Devil Summoner. Then there’s the Raidou Kuzunoha PS2 games, which used Devil Summoner but had elaborate subtitles. Now we’re at just Soul Hackers 2. It’s like the Soul Hackers part is so powerful it retroactively consumed every other piece of the title. Like an Ouroboros of brands.

That’s nothing new for MegaTen, but here it’s like an entire detachment from everything. So naturally I’m wondering, why Souls Hackers 2 then? Is it like a soft reboot or something? Or is the goal to turn Soul Hackers into a Final Fantasy kind of series? The only way I could know is to get my hands on the game, and turns out I got to do just that.

I was able to play several hours of Soul Hackers 2, up to a certain point of the story as designated by the Hedgehog King. I got to meet the central cast of characters, learn about the central story gimmick, explore the “Soul Matrix” and fuse a few demons. Frankly I’m trying to wrap my head around having an opinion on Soul Hackers 2, but I can gab a little about what I played.

It seems like there’s an earnest attempt to make Soul Hackers 2 a more accessible kind of Shin Megami Tensei. Of course by “accessible” I don’t mean the real kind, we’re talking complexity and difficulty. SMT is notorious for being tough, complex and generally hard to get into. The answer here seems to be to sand down the familiar SMT nuts and bolts to something a lot closer to a mass market JRPG.

The weirdest part is demon negotiation, a staple of most SMT games (and even Persona 5!), is not present at all. Instead, as you enter a dungeon your demons are sent out to “Scout,” randomly spawning around the map and helping you out. They’ll give you items, heal you or introduce you to a demon looking for a home. If you have space and give it money or an item it wants, you get ‘em no problem.

What’s the other thing you think of that’s a pillar of SMT games? The Press Turn system, with which SMT games utilize the elemental resistances and weaknesses combat is built around. Here, hitting a weakness gives you a “Stack,” which brings that demon out at the end of the round for some dramatic bonus damage. The more Stacks, the more damage. And what happens when your weakness is hit, or you get blocked or miss? Nothing; the punitive aspect of other SMT games is not present at all.

For a longtime MegaTen dork, the above is pretty confusing. It feels like the best parts of the whole SMT banner are just not here. But at the same time, what is here is compelling in its own right. The characters are interesting (especially the protagonist Ringo; she rules), the vibrant cyberpunk mess of humanity world explodes at 4K and there’s a couple of progression-slash-customization systems that really have my attention. The Soul Matrix thing I mentioned earlier is one of them, and COMP upgrading is another.

The Soul Matrix is basically a dungeon representing each member of the cast. You fight your way through it as you progress in the story, and unlock new story tidbits and abilities for the team. These areas have their own bespoke “requests” too, so they’re lovely little grinding spots full of goodies. I love that sort of thing.

COMPs, if you haven’t played the first Soul Hackers, are the devices “Devil Summoners” use for uh, demon summoning. In exchange for money, materials and the occasional sidequest, you can pump each character’s COMP up with all kinds of weird effects, passive abilities and other stuff I’m sure I haven’t seen yet. There’s a lot more tinkering with the non-demon side of things in this game than I ever would’ve expected. Is that a good thing? It certainly seems cool!

I’m not sure how much I’m vibing with the overall plot, either. And it’s particularly confusing to me as far as Soul Hackers 2’s connections to Devil Summoner. Right off the bat you’ve got the Phantom Society involved in things, and that’s some pretty loud continuity. And some other stuff happens later I don’t wanna spoil here. These are small connections, but more present on the main stage than I anticipated. And as far as the Plot is concerned, there’s a lot of expository text that tells you about the state of the world, but the focus here is definitely on the characters and their connection to Ringo.

So basically, Soul Hackers 2 is a strange game that I think is trying to do a lot at once. It’s trying to break away from Shin Megami Tensei into something else, be more approachable to less hardcore players and also continue the Devil Summoner continuity? I definitely have to put more time in before I come to any conclusions, but it’s such a strange stew of ideas I can’t help but feel eager to figure it all out.