Granzella’s Kazuma Kujo on the Rebirth of Disaster Report 4 The Disaster Report series has had a life every bit as turbulent as the earth-shaking incidents at the core of the games’ premise. All four games in the franchise appeared under the name Zettai Zetsumei Toshi (“The Desperate City”) in Japan, but here in the U.S. the second entry was bizarrely renamed from “Disaster Report 2” to “Raw Danger,” and the third never showed up at all. And while the fourth chapter made its way to PlayStation 4 in Japan last fall and has been picked up for western release (along with a new port to Switch) by NIS America, it almost never happened at all.

Originally slated as a PlayStation 3 release set for 2011, Disaster Report 4 was derailed at the very tail end of its development cycle by the Touhoku Earthquake that hit Japan in March of that year. Publisher Irem announced DR4’s cancellation, indicating that the production of a game that romanticized surviving the aftermath of an earthquake in the wake of such a devastating real-life incident would be in poor taste.

While an understandable view, there have also been some insider reports that Irem intended to leave the video games business altogether and that the earthquake provided them with a convenient exit. Disaster Report designer Kazuma Kujo left Irem shortly thereafter to establish his own studio, Granzella, and in the process he acquired the rights to a number of Irem properties. That includes classics like R-Type–and Disaster Report 4. While it’s been a long time in coming, the international release of DR4 represents a great victory for Kujo and Granzella.

PRIMA: When we spoke at Tokyo Game Show 2011, you discussed your hopes and intentions for Granzella, which you were just getting off the ground. What has your journey (and the company’s) been like since then?

Kazuma Kujo: I believe I’m progressing toward the vision I established back in September 2011 (during the Tokyo Game Show).  The unfortunate thing, however, is that [Disaster Report 4] was originally meant to be achieved in half the amount of time.

PRIMA: Disaster Report 4’s intended launch in 2011 was affected by the Touhoku earthquake, but I know that many fans reached out to you to encourage you to move ahead with plans to publish the game despite (or because of) the real-life disaster. Looking back, what are your feelings on the feedback you received from the fan community? What impact did fans have on the game?

KK: We already had decided to bring back the title, so it’s a stretch to say that fan feedback had a direct impact on its return. What greatly surprised us, however, was the overwhelmingly positive reception we received when we announced that Disaster Report 4 would be coming back via Granzella. Their sentiments fueled us to work even harder on the game.

PRIMA: Generally speaking, has DR4 changed much from its original near-final form to the version that launched recently in Japan and is coming to the U.S.?

KK: The world is different from what it was eight years ago, so there are some aspects of the game that wouldn’t fit anymore and were changed, but on a large scale, not much was altered. Of course, the most obvious change we needed was modernizing a game developed for PlayStation 3 to be optimized for PlayStation 4.

PRIMA: For American fans who have only played the first two games in this series, what new systems or concepts can they expect to see in DR4?

KK: Compared to Disaster Report 1 and Disaster Report 2, which leans strongly toward action, Disaster Report 4 is more of an adventure game that focuses on human interactions. With this in mind, we didn’t focus so much on evolving the gameplay, but more so on pivoting the main focus from action (like avoiding falling objects) to navigating these connections. There is a vast number of characters that appear, which may make the interactions with each of them seem shallow, but I feel that in times of a crisis, this is more realistic.  This is like a phrase we use in Japan: “Ichi-go, Ichi-e” (once in a lifetime). You meet people for a brief while and then never see them again, a sentiment I feel is unique.

PRIMA: Will our having missed out on a U.S. release for Zettai Zetsumei Toshi 3 affect our understanding or enjoyment of DR4?

KK: There’s no problem at all! Not having played Disaster Report 3 doesn’t mean you won’t understand Disaster Report 4. There’s a character from the third game that does appear, but the stories are not connected.

PRIMA: Overall, what balance do you strive for when it comes to mixing the realities of survival and the more fantastic concepts possible in video games?

KK: To be honest, when it comes to making video games, I mostly do as I please. Of course, being realistic does take priority, but when being a stickler to reality becomes too much of a hindrance, I try not to become too fixated on such issues. The main theme of the series is realistic, so the game’s base should have realism, but I feel the story can be surprising as long as it’s a plot that could happen within our modern world. 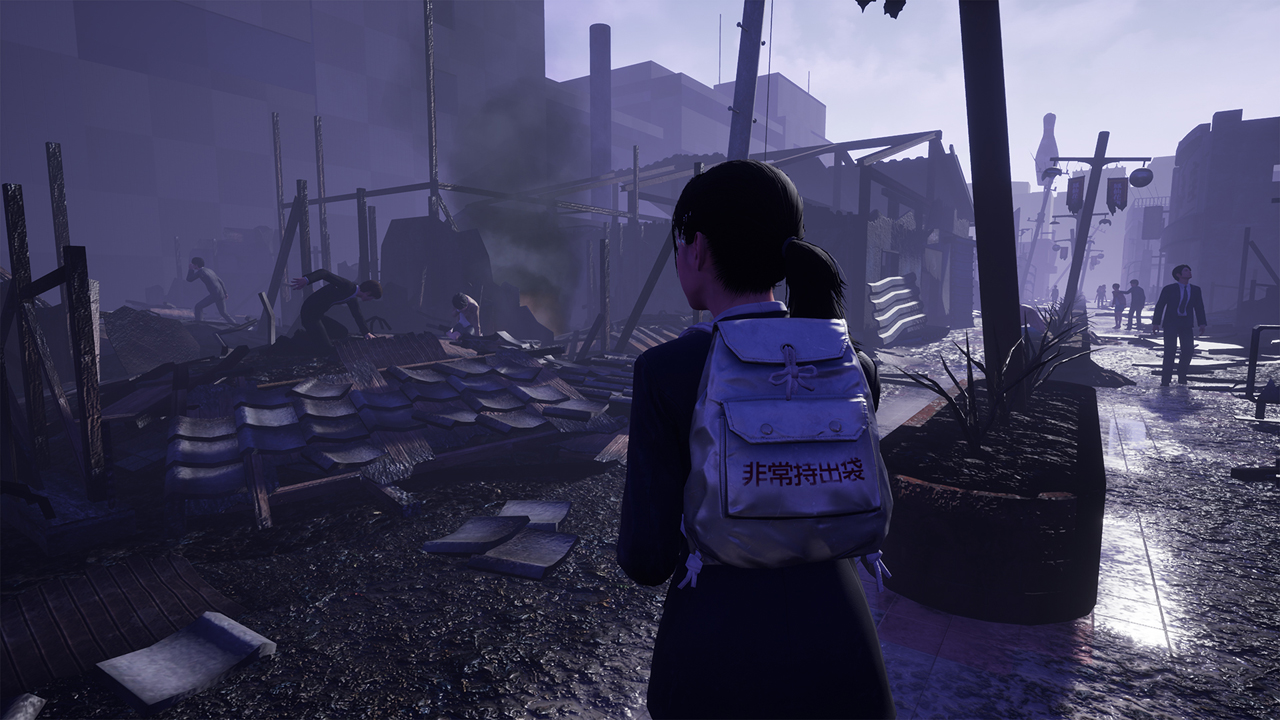 PRIMA: How heavily do you intend to modify the cultural content of DR4 for the U.S.? Do you feel the localization needs to be made more familiar to Americans who have never experienced a dense Japanese urban landscape like the one in DR4? Do you think DR4 still works even if the audience doesn’t experience the uncanny sensation of a familiar, comfortable environment being reshaped by a catastrophic event?

KK: While working with local publishers in Taiwan and Korea, we were requested to translate storefront and bus signs into the local language. However, when working with NIS America, we were told that it’s OK for them to be left in Japanese. Since the city is designed with a very Japanese feel, replacing such aspects would take away from the atmosphere. Also, just replacing these signs doesn’t necessarily mean the setting would now be Western.

NISA: We wanted players to experience the game with as much of its original atmosphere as possible!

PRIMA: Will you be fine-tuning any technical aspects of the game for its U.S. release? Will there be any newly added content?

KK: In the midst of getting Switch and PC version ready for the Western release, the PS4 version is also going to get some technical clean-ups. We’re already seeing a lot of improvements in our current development phase!

PRIMA: Besides Disaster Report and R-Type, what other former Irem properties is Granzella working on? Is there a chance for Steambot Chronicles 2 to finally see the light of day like DR4 has? It’s been a long time since the TGS demos of Steambot Chronicles 2, but it was quite impressive.

KK: We’re currently receiving a large number of fan requests, which we’re looking into as much as we can. So, such sequels and more may be possible! As for Steambot Chronicles 2, we’re working hard to make it happen, as we feel it deserves to be.